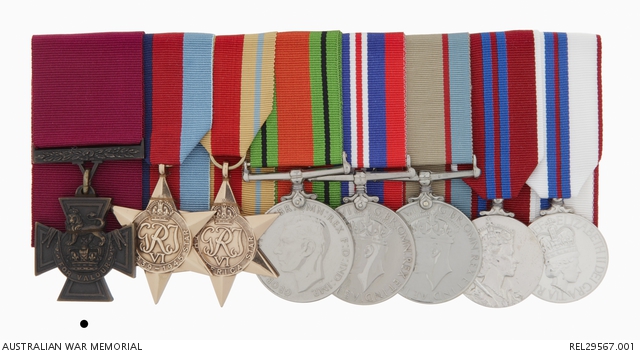 Born in 1916, Arthur Roden Cutler saw pre-war service in the Citizen Military Forces with the Sydney University Regiment. On 1 May 1940 he enlisted in the Second AIF as NX12378, and was posted as a Lieutenant to 2/5 Australian Field Regiment (7 Division). His Victoria Cross was awarded for actions between the 19th of June and 6th July 1941 in the Merdjayoun-Damour area of Syria. The citation reads as follows:

'For most conspicuous and sustained gallantry during the Syrian Campaign and for outstanding bravery during the bitter fighting at Merdjayoun when this artillery officer became a byword amongst forward troops with which he worked.

At Merdjayoun on 19th June, 1941, our infantry attack was checked after suffering heavy casualties from an enemy counter-attack with tanks. Enemy machine gun fire swept the ground, but Lieutenant Cutler with another artillery officer and a small party pushed on ahead of the infantry and established an outpost in a house. The telephone line was cut and he went out and mended this line under machine gun fire and returned to the house, from which enemy posts and batteries were successfully engaged. The enemy then attacked this outpost with infantry and tanks, killing the Bren gunner and mortally wounding other officers. Lieutenant Cutler and another manned the anti-tank rifle and Bren gun and fought back, driving the enemy infantry away. The tanks continued the attack, but under constant fire from the anti-tank rifle and Bren gun eventually withdrew. Lieutenant Cutler than personally supervised the evacuation of the wounded members of his party. Undaunted he pressed for a further advance. He had been ordered to establish an outpost from which he could register the only road by which the enemy transport could enter the town. With a small party of volunteers he pressed on until finally with one other he succeeded in establishing an outpost right in the town, which was occupied by the Foreign Legion, despite enemy machine gun fire which prevented our infantry from advancing. At this time Lieutenant Cutler knew the enemy were massing on his left for a counter-attack and that he was in danger of being cut off. Nevertheless he carried out his task of registering the battery on the road and engaging enemy posts. The enemy counter-attacked with infantry and tanks and he was cut off. He was forced to go to ground, but after dark succeeded in making his way through enemy lines. His work in registering the only road by which enemy transport could enter the town was of vital importance and a big factor in the enemy’s subsequent defeat.

On the night of 23rd-24th June he was in charge of a 25-pounder sent forward into our forward defended localities to silence an enemy anti-tank gun and post, which had held up our attack. This he did and next morning the capture of Merdjayoun was completed. Later at Damour on 6th July, when our forward infantry were pinned to the ground by heavy hostile machine gun fire Lieutenant Cutler, regardless of all danger, went to bring a line to his outpost when he was seriously wounded. Twenty-six hours elapsed before it was possible to rescue this officer, whose wounds by this time had become septic necessitating the amputation of his leg. Throughout the Campaign this officer’s courage was unparalleled and his work was a big factor in the recapture of Merdjayoun.'

After his return to Australia in late 1941, Cutler held a variety of appointments including; High Commissioner to New Zealand 1946-52, High Commissioner to Ceylon 1952-55, Australian Minister to Egypt 1955-56, High Commissioner to Pakistan 1958-61, Australian Consul-General in New York 1961-65 and Australian Ambassador to the Netherlands in 1965. In December 1965 he was created Knight Commander of St Michael and St George, and in January 1966 he was sworn in as Governor of New South Wales, a position which he held with distinction until his retirement in 1981.