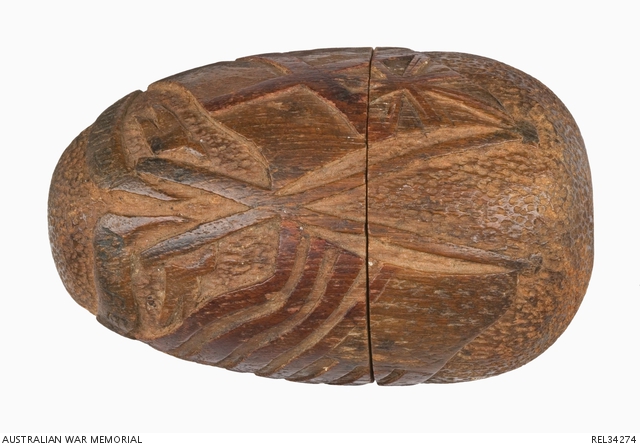 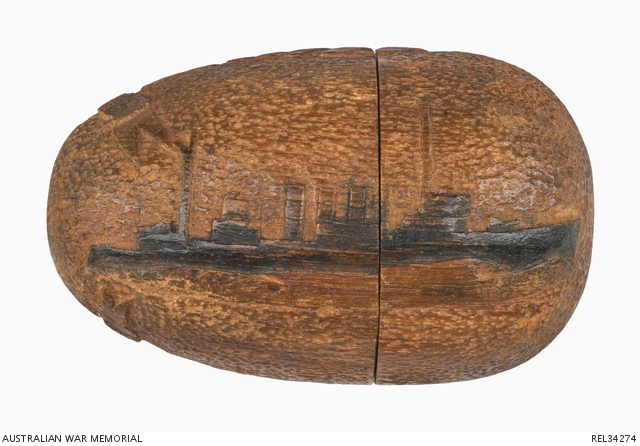 Tropical seed pod carved with naval motifs. The item is hollow and opens to reveal an interior which is partly lined with dark cotton. The exterior carvings feature crossed flags; the British white ensign and the flag of the United States of America. Below the two flags are scrolls and the names 'A F M MORRISON' and 'R J REHNER' respectively. On the other side of the item is carved a naval vessel in sillouette which is not identified, but appears to be an early 20th century cruiser or destroyer.

Jan Sigvard van Os was born in Batavia in the Netherlands East Indies on 4 December 1915. He served for a year in the Royal Netherlands Navy (RNN) in 1934-1935, and was recalled to duty during the Second World War.

Van Os served as a shore-based crew member of RNN flying boats and small craft and in March 1942 was selected for evacuation to Australia together with many other RNN personnel. Unfortunately, the KPM steamer Duymaer Van Twist, on which they were being transported, was intercepted by Japanese cruisers two days out of Tjilatjap, and all on board became prisoners. For the next three and a half years, van Os was held at the Macassar Camp, in the Celebes, housed in the former Dutch military barracks outside the town. The camp eventually housed 1800 Dutch prisoners, 945 British, 167 Americans and a few Australians.

In 1942 van Os had surgery to repair a hernia incurred while hauling coal for the Japanese. As a result he was deemed unfit for transfer to Japan and remained in Macassar. He kept a clandestine diary of his experience in captivity which detailed food rations, his work for the Japanese, the names of fellow POWs who died, and the recreational pursuits he undertook to alleviate boredom. The latter included attending lectures, studying Arabic, Bahasa Malay and Sanskrit, shorthand, astronomy and astrology. He also carved wooden items, repaired and made clothes and produced engraved identity tags made from aluminium. He sold the latter so that he could buy additional food and medicines. His diaries follow his increasing ill-health from 1944 onwards. He was hospitalised in the camp for much of 1945 suffering from pellagra, beri-beri and dysentery.

At the end of the war van Os was evacuated to Australia for recuperation, travelling on a crowded Dutch Catalina aircraft to Darwin, then on to Melbourne, on 13 October 1945. He was given work at the Australian Navy Office in Melbourne and began to study accountancy. Van Os was also reunited with his mother and youngest brother who had survived Japanese captivity, and had been sent to recover in Australia before being returned to the Netherlands. His father had died in captivity and two brothers had died as prisoners of war.

In 1946 van Os married while his mother was still in Australia and able to attend the wedding. He and his wife, Avice, returned to the Netherlands in 1947, in order for him to be formally discharged from the RNN. Unable to afford the return fare to Australia he worked as head steward and barman on an Australian bound merchant ship in return for two free passages. He settled permanently in Australia and raised a family, and became a naturalised citizen in 1953. Jan van Os died in December 1984.

This carved seed pod appears to have been given to van Os by one of his fellow prisoners, possibly by a seaman from HMS Exeter, who is recorded in his diary as giving him a number of handmade items while both were in the camp hospital in 1945. The 'R J Rehner' marked on the seed is 2434109 Baker Second Class Robert Joseph Rehner from USS Pope, captured by the Japanese on 2 March 1942 after his ship had sunk the previous day while escorting the British heavy cruiser HMS Exeter. He was later transferred to from Macassar to Shinjuku camp near Tokyo. A career seaman, he retired from the US Navy in 1955 as a bosun's mate. 'A F M Morrison' is JX258710 Ordinary Seaman Alexander Morrison, captured by the Japanese on 2 March 1942 after HMS Exeter was sunk during the Second Battle of the Java Sea, on 1 March. He was also held at the Macassar POW Camp.