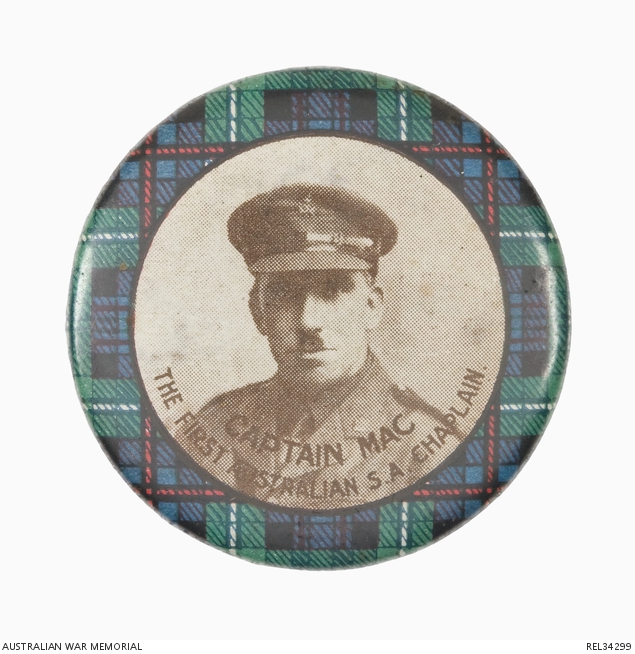 Small patriotic badge featuring a round sepia portrait of McKenzie, labelled 'CAPTAIN MAC / THE FIRST AUSTRALIAN SA CAPTAIN', bordered by a tartan pattern. The reverse is fitted with a brass captive mounting pin.

Produced as a souvenir of the work of Chaplain Major William McKenzie, who was awarded a Military Cross for his inspiring work tending the wounded and dead at Gallipoli. McKenzie, of Bendigo, Victoria, was a married chaplain with 25 years service in the Salvation Army when he enlisted on 25 September 1914, aged 44. He embarked from Sydney aboard HMAT Suffolk on 18 October, attached to 1 Brigade. His reputation as a fearless and dedicated Salvation Army officer grew during his time on Gallipoli, earning him the nickname 'Fighting Mac' and (unusually for a Chaplain) the award of a Military Cross. The citation for his award describes McKenzie's 'continued courageous devotion to duty during the occupation of Anzac. Both in the trenches and out, his behaviour has set a good example to the men in the fearless way in which he carried out his duties under fire.' McKenzie even involved himself in a number of front line attacks, wielding a shovel in lieu of a rifle. He remained with 1 Brigade throughout the war, serving in France and earning the praise and devotion of thousands of young Australians. He returned to Australia in January 1918 to public acclaim and later travelled to China to work as a missionary. He died in 1947. Thousands of patriotic button designs were issued during the war, usually for fundraising purposes, with many featuring images of local men whose expliots had been described in letters home and in newspaper reports. McKenzie's reputation and fame were such that souvenirs featuring the image of 'Fighting Mac' were highly popular and sold in large numbers. This example was probably produced by the Salvation Army.