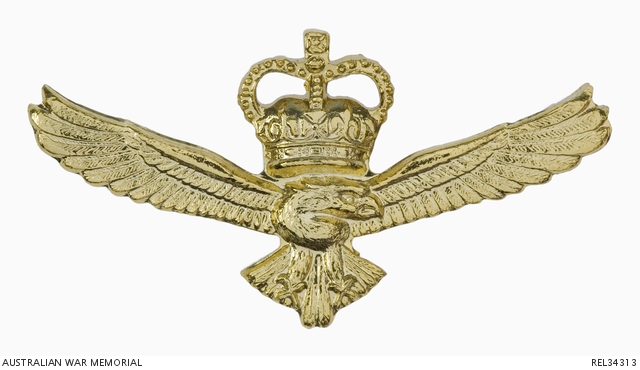 RAAF collar badge showing a wedge-tailed eagle surmounted by a Queen's crown. On the reverse are two attachment lugs.

Associated with the service of Corporal David Clews. Clews trained as an electrician with the Royal Australian Air Force and saw active service in both East Timor and Iraq.

Clews joined No. 381 Expeditionary Combat Support Squadron (ECSS) in May 1998 when the unit was first established. No. 381 ECSS was part of the No. 395 Expeditionary Combat Support Wing and was a fully deployable airbase operations unit that provided airbase specific operational support and common combat support functions to flying units at forward operating airbases.
Given the expeditionary nature of this squadron it was one of the first RAAF units to deploy to East Timor in September 1999 as part of Operation Warden - the deployment of the International Force East Timor (INTERFET).

On 20 May 2002 East Timor became an independent country and UNTAET was succeeded by the United Nations Mission of Support in East Timor (UNMISET). Operation Tanager ceased and No. 381 ECSS to return to Australia.

In April 2003 Clews was deployed to Baghdad as part of Operation Falconer - the deployment of Australian combat troops to Iraq. Clews served as a RAAF airfield engineer and worked with the Air Traffic Control Detachment stationed at Baghdad International Airport. The airfield engineers were tasked with turning the air traffic control tower and adjacent multi-story operations building (both in an advanced state of disrepair) into a fully functioning work facility for the Air Traffic Control Detachment. A challenging task, as on initial inspection very little was running other than limited power. Complicating matters further was that the engineers had to work around the Air Traffic contingent, who had already set up in both locations.

When Operation Falconer concluded in July 2003, Clews was posted to No. 1 Combat Logistics Squadron RAAF based at RAAF Base Townsville. He remained with that unit until 1 January 2007 when it was amalgamated with No. 1 Air Terminal Squadron to form No. 1 Airfield Operational Support Squadron. This unit is responsible for providing both fixed-base and expeditionary support for air movements, including explosive ordnance disposal functions and airfield engineering to the RAAF's Expeditionary Combat Support Squadrons.