Dead bodies on barbed wire: illustrating the poem 'Trench idyll', in a book of poems by Richard Aldington

Images of war: a book of poems by Richard Aldington 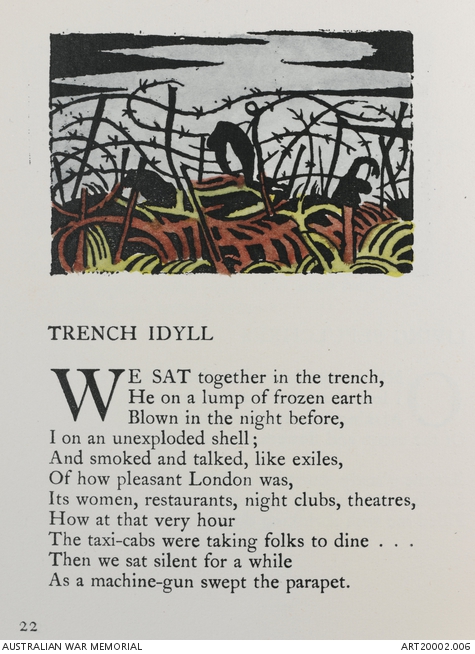 Hand-coloured woodcut illustrating the poem 'Trench idyll', the sixth illustration in a book of poems by British poet and novelist Richard Aldington (1892-1926), published by Beaumont Press, London, 1919. This illustration is on p. 22. The image depicts three dead bodies hung on barbed wire. The poem describes two men in a trench having a conversation about the pleasures of London, then one of them talks of removing the dead bodies from the barbed wire and says how disturbed he was when they disintegrated at being touched: 'The worst of all was/ They fell to pieces at a touch/ Thank God we couldn't see their faces;/ They had gas helmets on...'. The work is taken from one of a series of black-and-white sketches that Nash inscribed with colour notes. These sketches are held in the Victoria and Albert Museum, London. There are copies of this book without the hand-colouring at the Minories, Colchester and the Victoria and Albert Museum, London. 'Images of war' was Aldington's second volume of poetry.