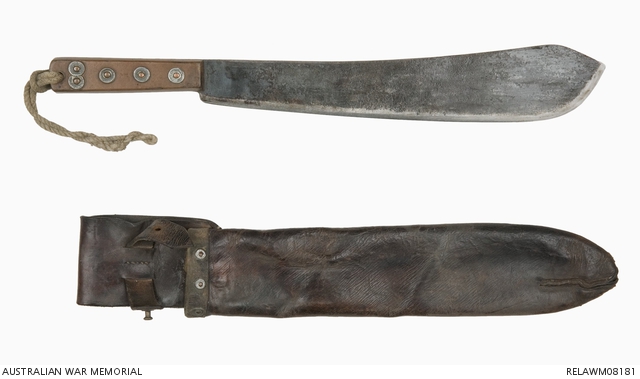 British Machete and Scabbard. The hilt has plain wood grips held to the tang with five large copper rivets. The pommel slot has part of a rifle 'pull through' rope made into a wrist strap threaded through the hole. The plain blade is a bolo style being 2.75 inches at the widest point. It has 'SAMUEL & Co MITCHEN' in a snake banner over 'SHEFFIELD 1918' on the left side. The brown leather scabbard has a single stitched seam at the back and a large belt loop with a brass button handle retaining strap attached with three copper rivets at the top. The belt loop is stamped at the rear 'LEATHERIES LTD 1918'.

This machete, owned by Corporal Arthur Percy Sullivan VC, was issued in lieu of an entrenching tool to troops of the North Russia Relief Force because the area of operations were largely amongst forests with considerable undergrowth.

Sullivan was born on 27 November 1896 in Prospect, South Australia. The only child of Arthur Monks and Eliza Sullivan, he was educated at Crystal Brook Public School and Gladstone High. Leaving school in 1913, he took up a junior position with the National Bank of Australasia at Gladstone. At just 17 at the outbreak of the First World War, Sullivan was too young to enlist without his parent's consent, which was not forthcoming. In May 1915 he accepted a promotion to general clerk and a transfer to the Broken Hill branch. This was followed, in October 1916, by a transfer to the bank's Maitland branch in South Australia. On 27 April 1918, Sullivan attended a gala parade in the streets of Port Pirie, 150 kilometres north of Maitland, in aid of the Returned Soldiers' Appeal. Now 21 years old and no longer requiring his parents' consent, he enlisted on the spot and, after initial training, was allotted to the 3rd General Service Reinforcements as private 56133.

He embarked in Melbourne on HMAT A74 Marathon on 23 July, arriving in England on 27 September. On 5 October he was attached to the Reserve Brigade Australian Artillery as a gunner however the war ended before Sullivan could see any active service. He was promoted to acting corporal on 23 March 1919. Instead of returning home, Sullivan volunteered for the North Russia Relief Force (NRRF), a unit formed to assist the withdrawal of British troops stationed in Russia following the Bolshevik uprising of 1917. Sullivan joined the British 45th Battalion Royal Fusiliers on 28 May as corporal (service number 133003), part of the NRRF brigade under the command of General L W de V Sadleir-Jackson. To complete his enlistment in the British army he was officially discharged from the AIF on 12 June 1919. He was one of around 150 Australians in the 8000 strong NRRF contingent. For his actions in saving the lives of an officer and three other fusiliers under fire at the crossing of the Sheika River, he was awarded the Victoria Cross.

In 1937, Sullivan was chosen to join the Australian Coronation Contingent (ACC) for the crowning of King George VI. On 31 January 1937 Sullivan re-enlisted as a gunner (470009) with the Royal Australian Artillery Regiment, a condition imposed on all those selected for the contingent who were not in the permanent forces. The ACC embarked from Melbourne on the RMS Oronsay on 16 February 1937. On 9 April, while in England with the contingent, Sullivan was returning to his lodgings at Wellington Barracks along Birdcage Walk when he was 'besieged by autograph hunters'. Attempting to escape from the melee, he slipped on the kerb and fell heavily to the ground, fracturing his skull. The guards on duty at the barracks took him to the orderly room but he died soon afterwards.

Sullivan was given a full military funeral at Wellington Barracks on 13 April. Among the many dignitaries attending were nine VC winners. Following the funeral, Sullivan was cremated at Golders Green, with members of the ACC lining the road leading to the crematorium. When the ACC finally took their place in the coronation procession on 12 May 1937, a gap was left where Sullivan would have been. In 1939, a plaque in his honour was placed on the railing of Wellington Barracks close to where he fell. He was survived by his wife and three children.