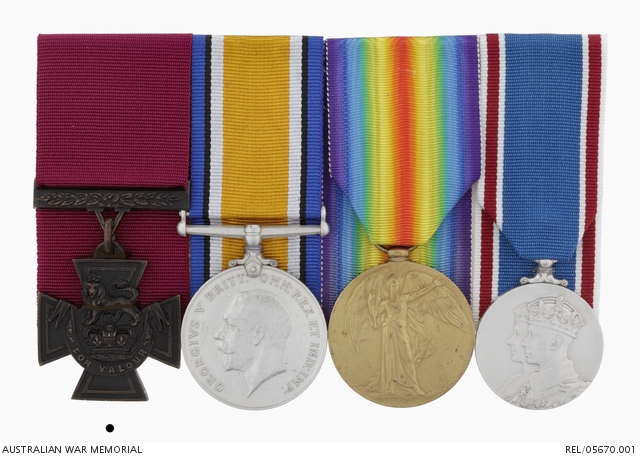 Arthur Percy Sullivan was born on 27 November 1896 in Prospect, South Australia. The only child of Arthur Monks and Eliza Sullivan, he was educated at Crystal Brook Public School and Gladstone High. Leaving school in 1913, he took up a junior position with the National Bank of Australasia at Gladstone. At just 17 at the outbreak of the First World War, Sullivan was too young to enlist without his parent’s consent, which was not forthcoming. In May 1915 he accepted a promotion to general clerk and a transfer to the Broken Hill branch. This was followed, in October 1916, by a transfer to the bank’s Maitland branch in South Australia. On 27 April 1918, Sullivan attended a gala parade in the streets of Port Pirie, 150 kilometres north of Maitland, in aid of the Returned Soldiers’ Appeal. Now 21 years old and no longer requiring his parents’ consent, he enlisted on the spot and, after initial training, was allotted to the 3rd General Service Reinforcements as private 56133.

He embarked in Melbourne on HMAT A74 Marathon on 23 July, arriving in England on 27 September. On 5 October he was attached to the Reserve Brigade Australian Artillery as a gunner but the war ended before Sullivan could see any active service. He was promoted to acting corporal on 23 March 1919. Instead of returning home, Sullivan volunteered for the North Russia Relief Force (NRRF), a unit formed to assist the withdrawal of British troops stationed in Russia following the Bolshevik uprising of 1917. He was one of around 150 Australians in the 8000 strong NRRF contingent. Sullivan joined the British 45th Battalion Royal Fusiliers on 28 May as corporal (service number 133003), part of the NRRF brigade under the command of General L W de V Sadleir-Jackson. To complete his enlistment in the British army he was officially discharged from the AIF on 12 June 1919.

British troops had first been sent to North Russia in 1917 after the Bolsheviks had seized power and signed a peace deal with Germany. By 1919 the Armistice had resolved the German issue however British troops had become mired in the ongoing Russian civil war with no clear policy or objective. In March 1919, the NRRF was proposed as a mainly volunteer force to counter the offensives of the Bolsheviks thereby creating the opportunity for the withdrawal of the Allied troops already in Russia.

In August 1919, Sadlier-Jackson’s brigade pushed down the Dvina River and attacked the Bolshevik lines. The attack had three main aims: to lower the morale of the enemy, to push the Bolshevik’s river fleet back far enough to mine the river for the impending withdrawal and to raise the morale of the loyalist Russians. Sullivan was posted with 16 Platoon D Company, part of the column charged with taking the river towns of Sludka and Lipovets. The attack began at around midday on 10 August and by that afternoon the towns had been captured.

That evening the column moved off to try and link up with the main force. Their progress was hampered by the wounded, over 500 prisoners, and the need to take the village’s inhabitants to stop them alerting the Bolsheviks. Sullivan’s platoon was acting as rearguard for the column. In the early hours of the 11th, the column was moving across the swamp-like Sheika River, on a flimsy single plank bridge when it came under enemy machine gun and rifle fire. The rear guard moved on to the bridge under a hail of fire. Close to Sullivan, Lieutenant Lord Settrington, son of the Earl of March and a former prisoner of the Germans, was wounded and fell into the river. In the face of intense fire, Sullivan immediately jumped in and rescued Settrington, together with another three men who were in difficulty after falling into the swamp.

For his actions during the withdrawal across the river, Sullivan was awarded the Victoria Cross (VC). The recommendation for the award reads: ‘For very conspicuous bravery and devotion to duty during a withdrawal across the Sheika River, North Russia, during the withdrawal of his platoon across the river on a narrow plank, after a rearguard action to cover the column. One officer and three men fell into the swamp, which was very deep. Without hesitation, and under intense rifle and machine gun fire, he jumped into the river and rescued these four men one by one. But for this gallant action these men would have undoubtedly been drowned. It was a splendid example of heroism, more so as everybody was on the verge of exhaustion and the enemy were less than 100 yards away from him.’

Sullivan knew of his VC award before he returned to England but decided to return home to Australia rather than endure the ceremony of a Royal investiture. Later he would describe his actions at the crossing of the Sheika River as ‘not much to talk about’. He became known as ‘the shy VC’ for his unassuming character and reluctance to talk of his exploits. He arrived back in Adelaide on 12 December 1919 to a hero’s welcome and was finally presented with his VC by Edward Prince of Wales at Adelaide’s Government House on 13 July 1920. On 5 December 1928 he married Dorothy Francis Veale in Melbourne. Following the war he resumed his banking career with the National Bank of Australasia, rising to branch manager in Casino, NSW, in 1934.

In 1937, Sullivan was chosen to join the Australian Coronation Contingent (ACC) for the crowning of King George VI. On 31 January 1937 Sullivan re-enlisted as a gunner (470009) with the Royal Australian Artillery Regiment, a condition imposed on all those selected for the contingent who were not in the permanent forces. The ACC embarked from Melbourne on the RMS Oronsay on 16 February 1937. Sullivan had a further reason to take this voyage. His friend and fellow VC winner, Sergeant Arthur Evans, had died while in Australia and he had promised to return Evan’s ashes to his family in England.

While on board ship, Sullivan did not always appreciate a return to military discipline. On two occasions he was charged with offenses. The first charge of failing to attend a 7am parade on 3 March 1937 was dismissed, however it seems his response to the first offense instigated a new charge of the same date: ‘Conduct to the prejudice of good order and military discipline in that he at the termination of an interview in the Orderly Room, and after having been refused permission to speak, said:”Thanks very much, Sir, I had some things to say to you” or words to that effect, in such a manner as to show disrespect to his Commanding Officer.” On this charge he was found guilty and fined 10 shillings.

The ACC arrived in England later that month and Sullivan duly presented the ashes to Evan’s sister at Lytham-St Anne’s on 27 March. On 9 April, Sullivan, was returning to his lodgings at Wellington Barracks along Birdcage Walk when he was ‘besieged by autograph hunters’. Attempting to escape from the melee, he slipped on the kerb and fell heavily to the ground, fracturing his skull. The guards on duty at the barracks took him to the orderly room but Sullivan died soon afterwards. As a mark of respect, the contingent cancelled all engagements for three days, including the honour guard that was to meet General Sir Harry and Lady Chauvel on their arrival in London.

Sullivan’s death had a profound effect on the contingent and to the highest levels of government. To General Chauvel, the leader of the ACC, Sullivan’s death was a ‘severe blow’, telling reporters: ‘I was doubly shocked at the tragedy, firstly because Sullivan was a friend, and secondly because he was the contingent’s only VC.’ Chauvel, as director of the National Bank of Australasia, also knew Sullivan professionally. The King and Queen telegraphed Stanley Bruce, Australia’s High Commissioner in London and former Prime Minister, of their distress at ‘the sad news of Sullivan’s death.’

Sullivan was given a full military funeral at Wellington Barracks on 13 April. Among the many dignitaries attending were nine VC winners. Following the funeral he was cremated at Golders Green, with members of the ACC lining the road leading to the crematorium. When the ACC finally took their place in the coronation procession on 12 May 1937, a gap was left where Sullivan would have been. In 1939, a plaque in his honour was placed on the railing of Wellington Barracks near where he fell. He was survived by his wife and three children. Sullivan’s VC was bequeathed to the Australian War Memorial by his wife, Dorothy, in 1980.