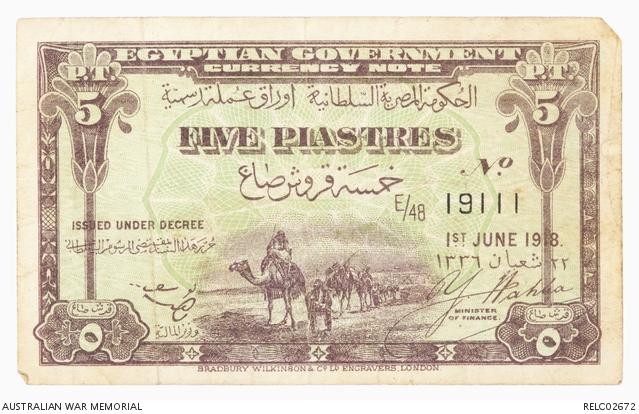 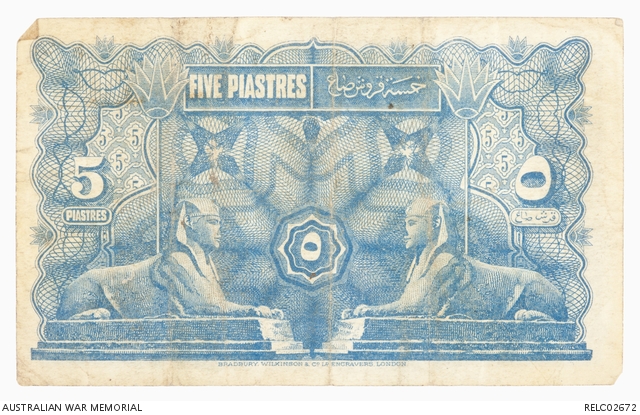 Egyptian 5 piastres note, serial number E over 48 and 19111. The note has been circulated, and it has three vertical fold marks.

Following the financial crisis resulting from the accumulation of Egypt's external debt, the Monetary Reform Law was issued on November 14 1885. By virtue of this Law, the gold standard became the basis for the Egyptian monetary system, and the country had a unified currency, the Egyptian gold pound. The pound was equal to 1.025 British Pounds Sterling and divisible into 100 Piastres.
Gold coins remained the medium of exchange until 1898 when the National Bank of Egypt was established and was granted, by the government, the privilege to issue Egyptian banknotes. The National Bank of Egypt started issuing banknotes for the first time on the 3rd of April 1899 but the notes were not legal tender until 2 August 1914 when a special Decree was issued. Thus, the Egyptian monetary system was changed to fiduciary paper money standard. Accordingly, gold coins were no longer used in circulation. The Egyptian government issued some small denomination notes, of which there were many signature and date varieties.
506 Sergeant Leonard Lisle Williams was born on 5 December 1893 at St Leonards New South Wales. He enlisted in the 2nd Light Horse Brigade, 7th Light Horse Regiment at Rosehill Camp New South Wales on 13 October 1914 aged 20 and embarked from Sydney on A31 HMAT Ajana on 19 December 1914. The 7th Light Horse Regiment fought in campaigns at Egypt, Gallipoli, Sinai and Palestine the latter including the Battle at Beersheba. Williams received the Military Cross for actions at Beersheba on the night of 31st July/1st August 1917. His citation reads: ‘On the night of 31st July/1st August 1917, for gallantry and skill. A night reconnaissance of the GAZA – BEERSHEBA road north of WADI IMLEIH was required to ascertain what enemy movement had been on it recently and whether the movement southwards the previous night of large bodies of enemy troops was a relief or a reinforcement to the BEERSHEBA Garrison. Lieutenant Williams with one non-commissioned officer and two men were selected for this reconnaissance. They dismounted about half a mile from WADI IMLEIH and moved forward from the forward party of two troops. Two enemy cavalry patrols had just previously been met, one of twelve men and the other of three, but these fell back. Lieutenant Williams crossed the Wadi and reached the GAZA – BEERSHEBA road, which he closely examined, remaining for about an hour, and followed it some distance South, and came to the conclusion that there had been no great passage of troops on it for 24 hours, although there were plenty of troops and Bedouin movement in the vicinity. He returned to the horses and on the way back his troop met a troop of 25 enemy cavalry, which were chased in a wild gallop in the darkness, one prisoner being taken who gave valuable information. On previous occasions this officer has shown gallantry and skill’
Williams was also twice Mentioned in Dispatches before his return to Australia on 28 June 1919. He served during the Second World War as a member of the Volunteer Defence Corp (VDC) which he enlisted in on 10 April 1942 aged 48. Williams served with the VDC until his discharge on 25 September 1945. His posting at discharge was 17 Battalion Volunteer Defence Corps.