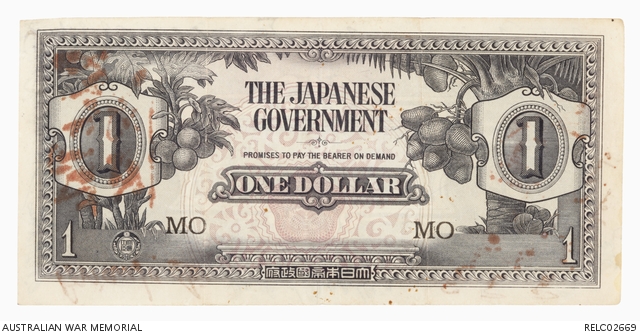 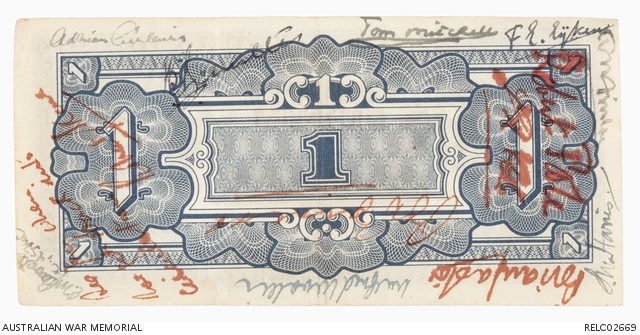 This note is from Series 2 of the Japanese Invasion Money (JIM) of Malaya which was issued in September 1942 by the Yokohama Specie Bank under the authorisation of the Japanese Government. A large quantity of these notes was issued with the exact number unknown even to the Japanese themselves as they did not bear serial numbers. With the Japanese occupation of Malaya in December 1941 the Japanese military launched its invasion currency to be used on par with the prevalent British Straits currency. The use of currencies other than the two approved monetary notes, counterfeiting, or wilful disruption in the circulation of the JIM would be severely punished under martial law. The issue of currency control within the Greater East Asia Co-Prosperity Sphere was resolved by introducing different military notes to suit the diverse monetary units of the occupied countries. British Malaya, Singapore and North Borneo utilised dollars and cents as their standard unit. The Philippines utilised Centavos and Pesos, the Netherlands East Indies (now Indonesia) used Guilders and Cents and the British Islands in the Pacific and adjacent seas, including New Guinea utilised Pounds and Shillings. The differentiation of the military notes used in the various Japanese occupied regions was through the first alphabet of the block letter. For example, the Burmese military note had its block letter beginning with ‘B’; Indonesia’s began with ‘S’; while the Philippines adopted the letter ‘P’. The letter ‘M’ was allocated for the JIM of Malaya as it was the first letter of the word Ma-rai-ee, the Japanese adaptation of ‘Malaya’ The Japanese Administration flooded the market with these dollar notes, causing a severe inflation. These notes were commonly referred to as ‘Banana Money’ because of the banana tree depicted on the $10 note.
N386511 Major Leonard Lisle Williams was born on 5 December 1893 at St Leonards New South Wales and served in the First World War as a member of the 2nd Light Horse Brigade, 7th Light Horse Regiment. He was twice Mentioned in Dispatches and received the Military Cross for actions at Beersheba. Williams enlisted in the Second World War on 10 April 1942 aged 48 as a member of the Volunteer Defence Corps. The Volunteer Defence Corps (VDC) was established in July 1940 by the Returned Sailors and Soldiers Imperial League of Australia, the forerunner of the RSL, and was modelled on Britain’s Home Guard. It was a national organisation, initially made up of ex-servicemen from the First World War who were too old for frontline service. Membership was open to men of between 18 and 60, and many young men who were in reserved occupations and were unable to join the defence forces joined the VDC to assist in preparation and protection of Australia, in case of enemy attack. In May 1941 the VDC came under the control of the Military Board and was tasked with training for guerilla warfare, protecting key points and providing defence for the individual area in which each VDC unit was located. In February 1942, the government expanded the VDC and constituted it as a corps of the Citizen Military Forces, or CMF. At its peak, the VDC had almost 100,000 members. Williams served in the Volunteer Defence Corp until his discharge on 25 September 1945. His posting at discharge was 17 Battalion Volunteer Defence Corps. NX70316 (N60129) Captain Adrian Herbert Curlewis and VX43577 Captain Thomas Walter Mitchell both joined the Australian 8th Division in 1940. As war with Japan loomed, the 8th Division were sent to Malaya, Curlewis and Mitchell arriving there on 19 February 1941. At the fall of Singapore on 15 February 1942, Curlewis and Mitchell were taken Prisoners of War by the Japanese. They spent three and a half years in the Changi Prisoner of War Camp located in the eastern part of Singapore. They did not return to Australia until late 1945.