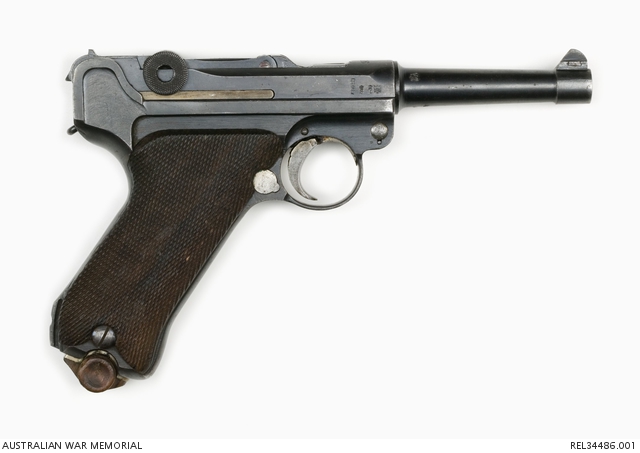 The P08 Luger is a recoil-operated, single action, locked breech, semi-automatic, striker fired pistol. The Luger features a unique toggle locking system, consisting of two tilt up bars and short moving barrel. The pistol has a frame-mounted manual safety at the left side of the gun. There is an 8 shot, inline magazine made from steel inserted in the pistol grip. The hand grips are made from wood and are serrated. The pistol has a blued finish. Markings ' ERFURT 1916 (CROWN CYPHER); MANUFACTURER'S & INSPECTORS PROOF MARKS ON PISTOL GRIP AND OTHER PARTS; 2 M 116; 18.

The markings on the pistol grip indicate that the pistol came from the German 2nd Munitions Supply Column and the rack number of the pistol is 116. The pistol was captured by 7009 Acting Sergeant G J Polain, 19 Battalion, AIF during the fighting near St Quentin, France in 1918. George John Polain was born at Forrest Gate, Essex, England in 1893 and was a divinity student in Melbourne when he enlisted in the AIF in August 1917. 7009 Private Polain embarked aboard HMAT Nestor in Melbourne on 28 February 1918 with reinforcements to 19 Battalion. Private Polain served with 19 Battalion until it was disbanded in October 1918 and he was transferred to 18 Battalion. Private Polain returned to Australia in March 1919. He was living in Orange, NSW when the Second World War commenced. He put his age down to enlist in the Second AIF in August 1940. As NX70175 Captain Polain he served as a Chaplain with 2/26 Battalion and became a Prisoner of War of the Japanese with the fall of Singapore in February 1942. Known to his men as 'Marmite George', Captain Polain was awarded an MID for 'Services rendered whilst POW in Japanese hands.'. George Polain died on 27 July 1974.