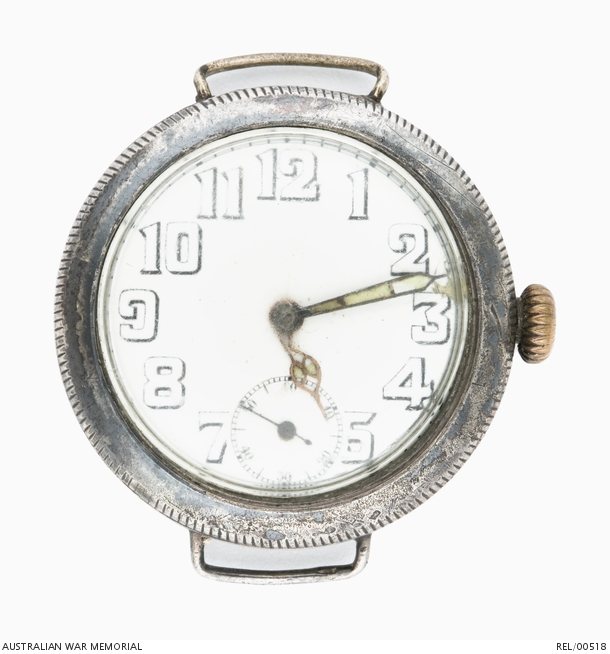 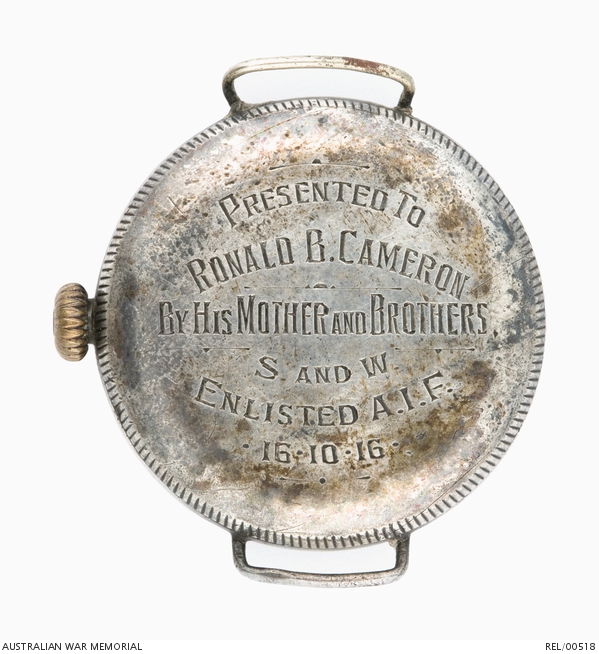 Rolex wristwatch, missing wristband. Inside of casing stamped with serial number 702720, W&D and 0,935. Reverse of case engraved 'Presented to Ronald B. Cameron by his Mother and Brothers S and W Enlisted A.I.F. 16.10.16'.

Wristwatch related to the service of 6534 Private Ronald Bowker Cameron, a farmer from Wondali, Queensland, who enlisted on 10 November 1916. The watch was given to Cameron by his mother (Mrs Elizabeth Annie Cameron) and two of his brothers, Stuart Donald and Walter Campbell Cameron, upon his enlistment. Cameron embarked for overseas service aboard HMAT Wiltshire from Sydney on 7 February 1917. After training in England, and spending a month in hospital due to mumps, Private Cameron crossed the Channel on 17 October 1917 to join 25 Battalion in Belgium, who were rebuilding their battalion in the aftermath of the assault on Broodseinde Ridge. He was gassed less than two weeks later, on 29 October and returned to England, suffering from 'suffocation poison'. After treatment he rejoined 25 Battalion in France on 24 February 1918. He was killed in action on 10 June 1918, most likely during 7 Brigade's night assault on Morlancourt. Cameron's mother wrote to authorities in October 1920, complaining that no effects had been returned and 'I only very casually heard that his watch had been given to a mate & nothing further ever heard of it; he, the mate, was taken to a Hospital ...'.
In September 1954, Mr Asher Rosemarin, a farmer of Hof-Ashdod, Israel, wrote to the Melbourne RSL asking if they could help locate any members of the Cameron family as he had the watch in his possession. Rosemarin had purchased the watch from an Austrian. The RSL managed to locate Cameron's next of kin and the watch was finally returned later that year. Watch repair markings scratched into the reverse of the watch appear to confirm this; a marking from 1950 uses the European 'VII' for June.