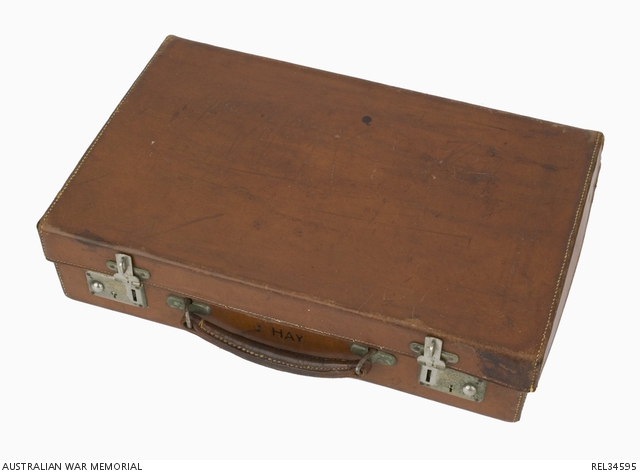 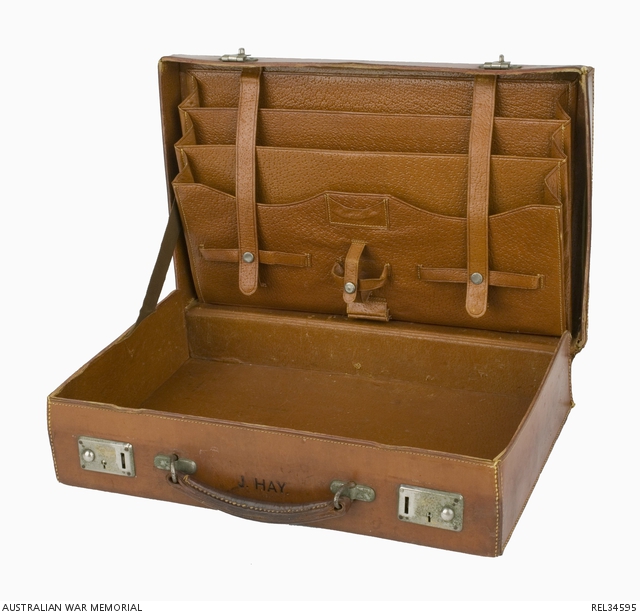 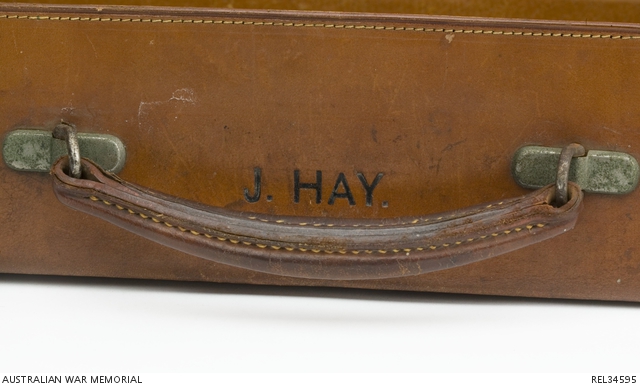 Brown leather attache case of sewn construction with nickel plated latches and handle mounts. Handle is also of leather. The name 'J. HAY' is impresed into the leather behind the handle. The interior of the lid is equipped with three leather concertina file holders secured by a pair of snap-fastened leather straps, a pair of pen holds, a name card holder and a small lidded, nickel-plated inkwell secured in a leather harness.

Attache case associated with Second Lieutenant John 'Jack' Hay, an Australian serving with 40 Squadron Royal Flying Corps (RFC). Jack Hay was the son of Isabella and William Hay. He was born at Double Bay, New South Wales on 22 January 1889 and was educated at Shore, Sydney Church of England Grammar School.

Hay travelled to England where he gained his Royal Aero Club Aviators Certificate on 2 June 1916 and enlisted in the Royal Flying Corps. In August 1916 he travelled to France with 40 Squadron RFC, who were equipped with FE 8 pusher biplanes.

On 23 January, the day after his 28th birthday, he shot down two German planes, before becoming the 17th victim of the famous German Ace, Baron Manfred von Richthofen. That day, aircraft from 40 squadron and those of Jasta 11, led by von Richthofen fought near Lens. During the battle Hay's plane caught fire after being attacked by von Richthofen, flying in a red Albatros DIII. Hay leapt, or fell from his plane to his death.

British pilots were not issued with parachutes and it was not unusual for pilots to leap to a quick death rather than burn in the highly combustible aircraft. Hay's body was recovered by Canadian troops and buried at Aire communal cemetery near the squadron's base in France. The grave marker was initially placed on a cut-down FE 8 propeller on his grave. It was later given to his family and brought back to Australia.