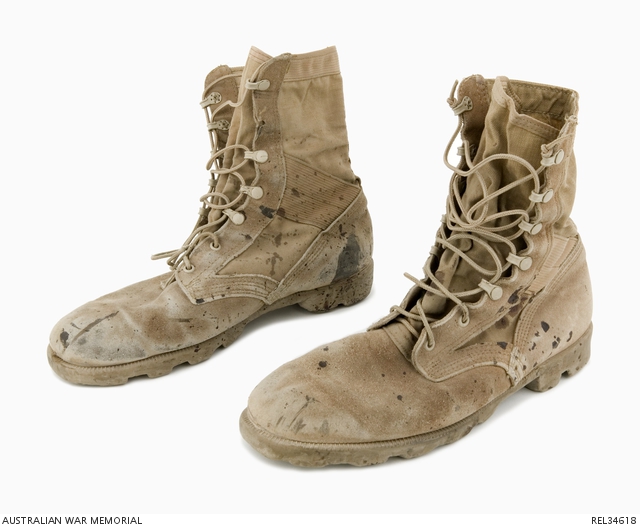 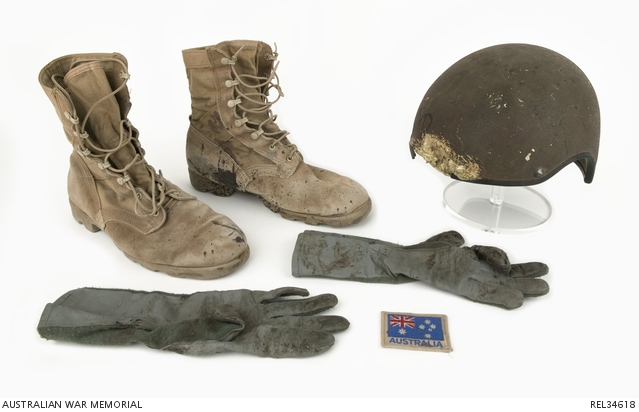 Pair of tan desert vulcanised boots. The boots are made from a variety of lightweight fabrics and materials, for wear in hot climates. The soles of the boots are made from vulcanised rubber, with the sole being set in a 'Panama' pattern. In the arch of each boot is the maker's name, 'ALTAMA' in raised detail. The name is surrounded by a raised rectangle with the letter 'R' in a circle after the name for registered trademark. The size, located above the maker's name has been obscured on each boot.

The heel and foot portion of the upper boots are made from tan coloured suede. The heel pieces are sewn to the front of the foot. The immediate front of each boot, either side of the tongue, is made from two pieces of suede sewn together for extra strength. This extends from the front piece of the boot up to the collar of the boot. These pieces are where the boot's lacing system is attached. At the bottom are two sets of opposing coated aluminium eyelets. Above these are five sets of opposing coated aluminium 'speed hooks'. One of the 'speed hooks' on the upper right boot has been torn away. Through the eyelets and hooks are threaded coated nylon laces. The laces are coated to minimise friction wear, when being done up. The laces are designed to be done up with one pull at the top of the laces. When undoing the laces, the laces are designed to loosen just as quickly.

The tongue of each boot is made of one piece Cordura reinforced around the rim with 25 mm nylon tape, which has been folded over and sewn. The tongues are sewn into the boot to protect the wearer's feet from dirt, stones and other ground elements from entering the boot during wear. The tongues are expandable to assist the wearer in putting on and taking off the boots easily. Sewn into the tongue of the left boot is a black nylon label with a 'Panama' sole pattern and 'ALTAMA' machine sewn in white cotton. Sewn into the tongue of the right boot is another black nylon label with the American Flag machine sewn in red, white and blue cotton and 'MADE IN U.S.A.' machine sewn in white cotton underneath. Inside each boot is a removable cushion insole which has perforations to assist in moisture evaporation. Both boots are blood stained over the uppers and on the soles. Traces of oil or vehicle lubricants are also visible on the boots.