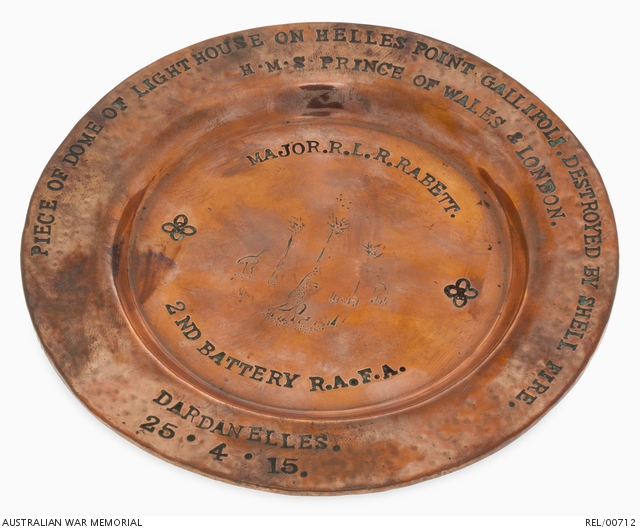 Circular copper ashtray in a low profile, flat-based dish form, with evidence of extensive hammering used to form the shape. The original copper sheet which formed the basis of this ashtray appears to have been about 2mm - 2.5mm thick. The 17mm wide rim features the following wording, fairly deeply impressed into the copper: (upper section) 'PIECE OF DOME OF LIGHTHOUSE ON HELLES POINT GALLIPOLI. DESTROYED BY SHELLFIRE H.M.S. PRINCE OF WALES AND LONDON'; (lower section) 'DARDANELLES 25.4.15'.
An incised decoration of two emus, a kangaroo and three palm-like trees has been placed into the centre of the bowl base, with the words 'MAJOR R.L.R. RABETT' above it, and '2ND BATTERY R.A.F.A.' below it. A pair of deeply impressed floral designs, made up of a series of circles (possibly the capital letter 'O'), appear either side of this central decoration. These have been impressed so hard that they originally distorted the base of the ashtray, and efforts have been made by the maker to re-flatten these sections. The accuracy and depth of the serif lettering appears to imply the use of steel letter punches.

This personalised ashtray was made at Helles and purchased by Major Reginald Rabett while serving at Gallipoli. A cottage industry of trench art ashtrays made from the copper of the Helles lighthouse dome appears to have been established by a member of the 29th (British) Division, with a number of ashtrays with similar inscriptions being produced. An engraved entry on a similar ashtray recently sold online in 2009 identified the maker of most of them as Battery Sergeant E H Cleall, 14th Siege Battery, 29 Division. M.E.F., and that he was operating in the vicinity of the lighthouse remains. The lighthouse had been shelled and destroyed by the British destroyers HMS 'Prince of Wales' and 'London' on Easter Sunday, 1915.

The buyers of the ashtrays were able to have them personalised, for a small additional fee, by the addition of their name and unit details. These appear to have been added using professional steel punches, owing to the accuracy, depth and precision of the lettering on the examples examined.

A number of decorations have been noted within the Australian War Memorial's collections, mostly within the bowl of the ashtray, some featuring crudely incised emus and kangaroos; others bearing a Turkish crescent and star, while others are relatively plain. This implies that such designs could be added for an extra fee.

This example was purchased by Major Reginald Lee Rex Rabett, 1 Field Artillery Brigade during his service on the Gallipoli Peninsula. Rabett, born at Sydney, NSW on 23 May 1887, was educated at Sydney University, was a notable oarsman in the Sydney Rowing Club and was employed as a clerk at Raine and Horne in Pitt Street. He also served in the NSW Militia with 44 Battery, Australian Field Artillery, from 1911, where he reached the rank of major. He applied for a commission in the AIF on 18 August 1914 and was accepted as a captain. He was promoted to major on 19 September and, because of his previous experience, made commander of 2 Battery, 1 Field Artillery Brigade before embarking for the Middle East aboard the 'Argyllshire' on October 18. His unit disembarked at Cape Helles on 4 May and within a few days were bombarding Turkish positions near Krithia; the unit was attached to the British 29th Division for most of the campaign. Rabett was evacuated on 8 November, suffering from jaundice. Aside from being mentioned in despatches, he was appointed a Companion of St Michael and St George (CMG) for 'distinguished service in the field' at Gallipoli - an appointment announced on 8 November 1915 and bestowed on him by the King in August 1917.

He wasn't released from hospital until late January 1916, and was made commander of the newly-formed 12 Field Artillery Brigade (4 Division) on 12 March, with the rank of temporary lieutenant colonel. This order was immediately cancelled and he was made a full lieutenant colonel. The Brigade operated 18 pounder guns. On 3 November 1917, Rabett was evacuated from France with 'trench fever'. He was mentioned in despatches of 7 November 1917 for 'distinguished and gallant service and devotion to duty during the period 26.2.17 to 20.9.17'. He never returned to his unit and was embarked to Australia on 15 February 1918, still suffering from nervous exhaustion and ulcers; his appointment was terminated on 16 October 1918. However from contemporary newspaper reports it appears that his spirit remained strong - he spent much of the remainder of 1918 delivering lectures on his experiences and impressions of service at citizens' meetings and recruitment rallies.