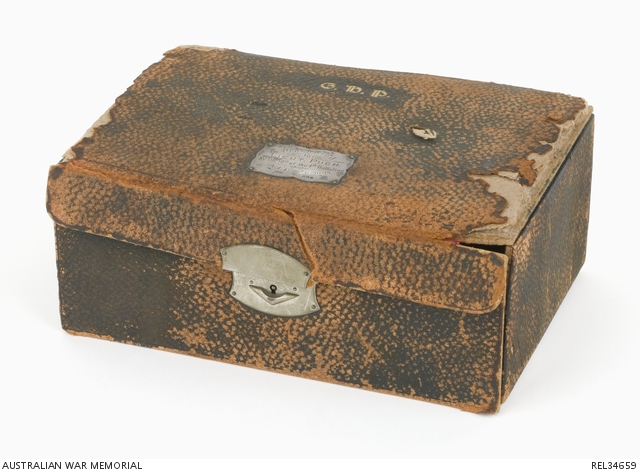 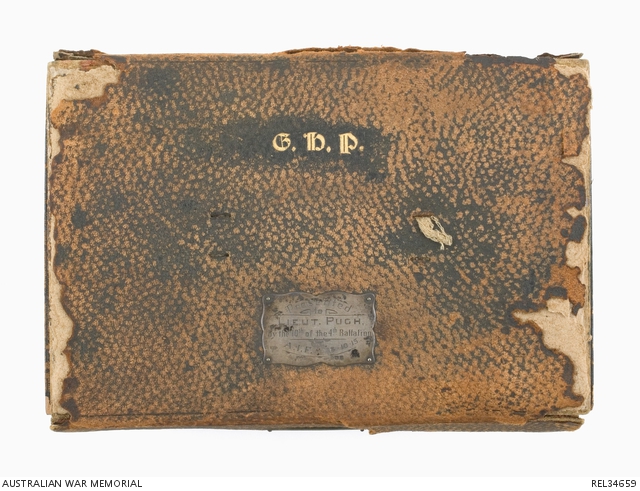 Presentation shaving and toiletry kit contained in a pigskin covered box. The lid is stamped with gold letters 'GHP' and bears a sterling silver plate, with Birmingham hallmarks for 1914, engraved 'Presented to LIEUT. PUGH By the 10th of the 4th Battalion A.I.F.' The lid of the box is secured to the base by a lock and key. The inside of the box is lined throughout with red leather fitted with loops to take the accessories inside. The lid of the box contains a large leather backed shaving mirror, two cut-throat folding razors with celluloid handles, a knife for paring fingernails, a button hook and a razor strop in a red leather case. One implement is missing from the lid, probably an emery board with handle. The body of the case contains a pair of ebony backed men's hairbrushes, each with an attached sterling silver shield engraved 'GHP', three glass bottles with stainless steel lids (two round and one rectangular), two stainless steel containers of different sizes, one for a shaving brush and one for soap, and a stainless steel cylinder to take a shaving stick that has a loose circular base to allow the stick to be pushed up for use. A rotating semi-circular drawer beneath the main body of the case contains a stainless steel bowl for shaving water, two small round glass jars with stainless steel tops and a rectangular stainless steel box. There is space for a second similar box, which is missing.

This presentation shaving and toiletry kit was given to Lieutenant George Harold Pugh by fellow members of the 10th Reinforcements to 4 Battalion, AIF, on 8 October 1915, the day the men sailed from Sydney for overseas service, aboard HMAT A69 'Warilda'. Pugh was born in Glebe, Sydney, on 16 January 1890 and was later educated at Fort Street Boys' High, where he was a member of the school cadets. After matriculating he undertook an 18 month course in physics before working as a commercial traveller. A keen Rugby Union player, Pugh represented both Australia and New South Wales. He travelled to the United States as part of a touring Waratahs team shortly before the First World War. He joined the AIF as a lieutenant after undertaking both NCO and then officer training at Liverpool, NSW, between May and August 1915, and was appointed to 4 Battalion AIF. Pugh trained in Egypt before his battalion left for France in March 1916. He was in charge of the machine gun section of the battalion when he led a small party of men, on the afternoon of 5 September 1916, to reconnoitre the enemy's position in front of the 2 Battalion trenches near Mt Sorrell, near Hill 60 in Belgium, which the 4th were due to relieve prior to a fresh advance. He was talking to a group of officers from 2 Battalion, while sheltering in a captured German dugout, when it was hit by a German minnenwerfer shell, killing most of them, including Pugh. The bodies of at least four officer's of 2 Battalion and the two visiting 4 Battalion officers were, according to an eye witness, 'smashed to pieces'. A number of other men were wounded. Pugh was initially interred in the Railway Dugouts Burial Ground near Ypres, but his body was exhumed after the war and buried at Strand Military Cemetery, Ploegsteert. Pugh's trunk containing his uniforms and personal effects were returned to his mother after his death, however this shaving kit was not listed in the inventory of returned material. It is possible that Pugh did not take it with him on active service as it was presented to him on the day of his departure overseas, and as his trunk would already have been packed and on the ship, he may have left it behind with a family member who had come to farewell him.