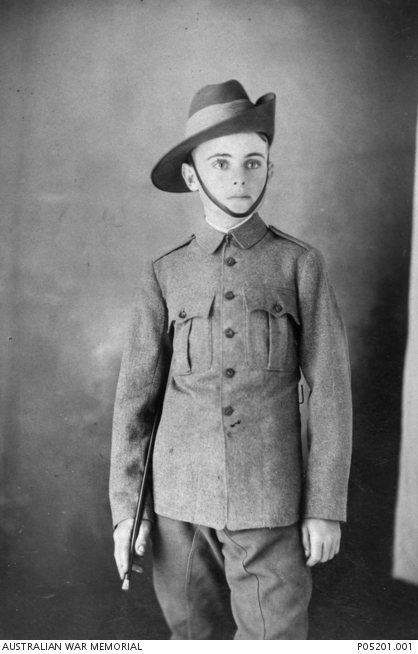 Studio portrait of George Harold Pugh in the cadet's uniform of Fort Street Boys' High, Sydney. After matriculating he undertook an 18 month course in physics before working as a commercial traveler. A keen rugby union player, Pugh represented both Australia and New South Wales. He travelled to the United States as part of a touring Waratahs team shortly before the First World War. He joined the AIF as a lieutenant after undertaking both NCO and then officer training at Liverpool, NSW, between May and August 1915, and was appointed to the 10th Reinforcements, 4th Battalion. He embarked from Sydney aboard HMAT Warilda on 8 October 1915. Pugh trained in Egypt before his battalion left for France in March 1916. He was in charge of the machine gun section of the battalion when he led a small party of men, on the afternoon of 5 September 1916, to reconnointre the enemy's position in front of the 2nd Battalion trenches near Mt Sorrell, near Hill 60 in Belgium, which the 4th Battalion were due to relieve prior to a fresh advance. He was talking to a group of officers from the 2nd Battalion, while sheltering in a captured German dugout, when it was hit by a German minenwerfer shell, killing most of them, including Pugh.