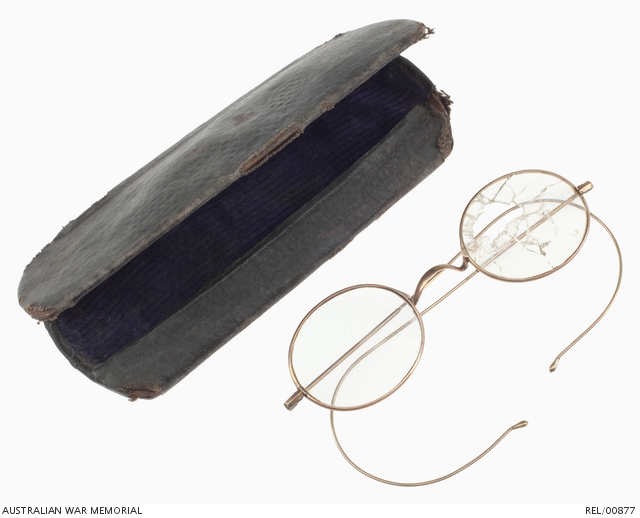 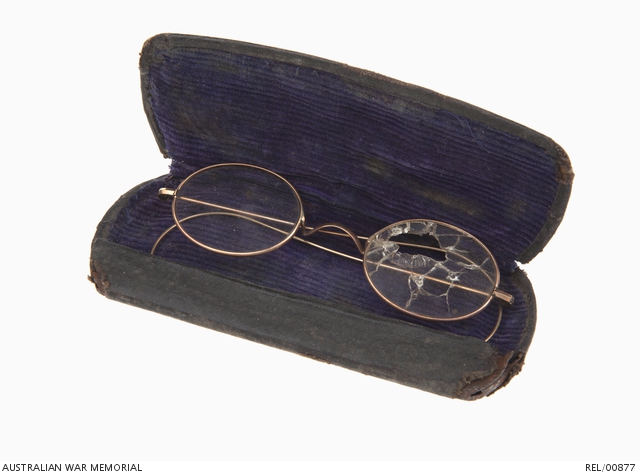 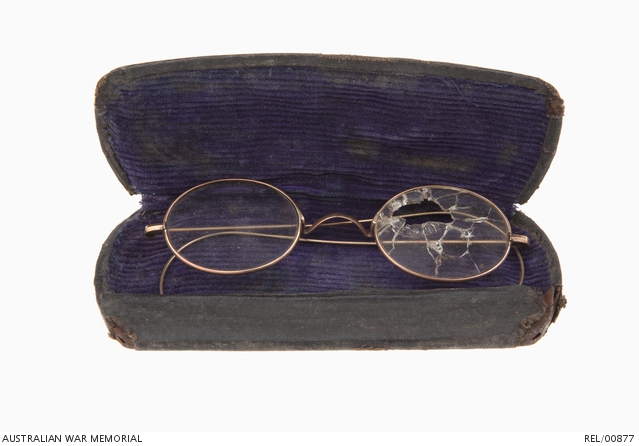 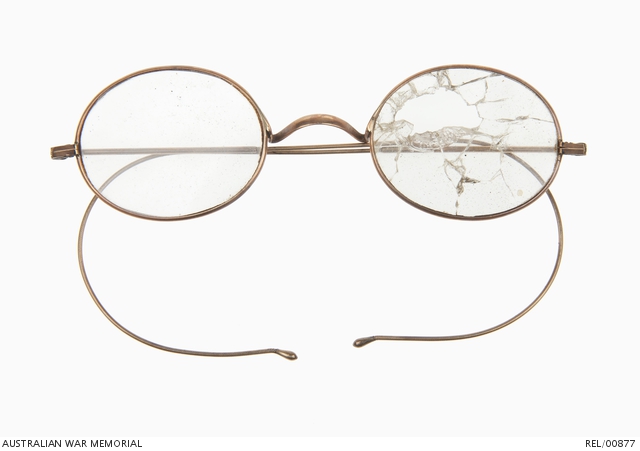 Pair of gold rimmed spectacles with bridge, no pads, and flexible wrap-around temples. The proper left lens has been shattered centrally, with one piece missing and the remainder cracked. It is stored in its case, which is of steel, with a sprung lid, bound in black leatherette on the exterior and corded purple velour in the interior. The case is dented and distorted.

Pair of prescription glasses worn by 2781 Temporary Sergeant William Robert Fisher of 1 Battalion, which likely saved his life. Fisher was born at Walcha, NSW, and was living at Manilla, NSW and employed as a school teacher when he enlisted in the AIF on 10 October 1916 at Armidale, aged 28 years. After a short period of initial training, he embarked for overseas service with the 6th reinforcements of the 33rd Battalion aboard the transport Beltana, which departed Sydney on 25 November and disembarked at Devonport, England on 29 January 1917. After further training at Larkhill Camp, he crossed the English Channel on 22 May, and was posted to 1 Battalion in France, joining them on 10 June. From statements on his service record, it appears Fisher was employed as a battalion runner.

Fisher was shot in the right foot on 4 October 1917 at Passchendaele Ridge and was evacuated to England. After recovery, he returned to France and rejoined his battalion on 26 March 1918, as they were withdrawn to reserve lines from the front lines at Mereten.

On 28 August, in the wake of the 8 August Offensive, the battalion was taking a well-deserved rest in the Morcourt Valley and Fisher, Private Thomas Painter, Private Frederick McCord and Lance Corporal John Drum were playing cards in a dugout. Painter stated at a subsequent enquiry that 'one of the men some minutes previous had moved a small shell (an anti-tank on tank shell) from the entrance of the dug-out. When we had started to play the shell was lying near L/Cpl Drum. He went to move it out of the way when it exploded.' The medical report noted that Lance Corporal John Drum was 'struck by shell fragments. Right hand shattered. Right leg injured through knee joint. Both amputated later; leg at thigh. Also compound fracture left leg.' The bespectacled Fisher was far luckier - a shell fragment from the explosion hit his glasses, deflecting it from his eye and only slightly wounding his face. John Drum survived and was fitted with artificial limbs in 1920; he had already been wounded in the Pozieres assault in July 1916.

On 23 August 1 Battalion was tasked with the assault on the Chuignolles sector. The attack commenced at 4.45 am with assistance from tanks and a creeping barrage. By 5.30 am Chuignolles had been taken and Long Wood, Arcy Wood and Luc Wood had all been cleared and occupied between 7.45 and 9.15am. Further exploitation of gains was made in the afternoon. For his participation in this attack, Fisher was awarded the Military Medal, the citation reads: 'As Company Runner during the attack, and particularly after the exploitation of initial successes had been undertaken and communications became correspondingly difficult, Private Fisher was frequently exposed to enemy fire, but with commendable cheerfulness and expedition he got all messages through and contributed to the liaison and co-operations which marked the success of the operation.'

On 2 January 1919, Fisher was made temporary sergeant while employed with the 1st Battalion Education Staff and after some leave, he returned to Australia aboard the transport Boorara which left England on 6 June 1919. He retained the rank of extra regimental sergeant 'for duty on board HMAT Boorara'. He arrived in Australia in August and was discharged from the AIF on 5 October 1919.