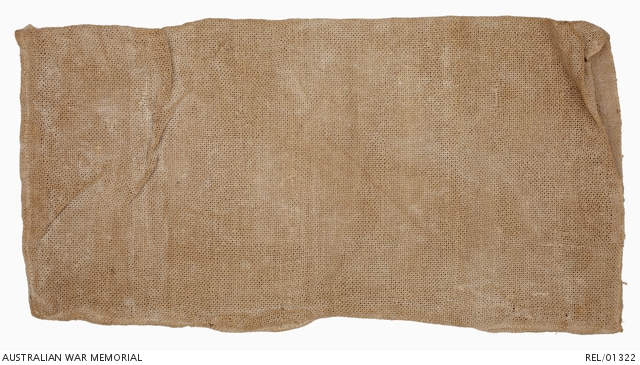 Brown German ersatz (substitute) sandbag made from paper twisted into strands, then woven. The bag is sewn together with cotton tread.

This German Ersatz (replacement) sandbag was collected by Chaplain 4th Class (Captain) Donald Burns Blackwood between 26 June and 12 July 1916, during his time in the line at Fleurbaix. He enlisted in the AIF, at the age of 31, on 1 October 1915 having previously served, from 1911, as a chaplain attached to Tasmanian Command, 6th Military District.
He proceeded overseas and was attached first as chaplain at the Aerodrome Camp in Egypt, before transferring to 52nd Battalion, 13th Brigade. He sailed with the battalion to France on 5 June 1916, arriving in Marseilles 12 June.

He was mentioned in despatches for his 'constant devotion to duty and untiring energy...' in France and Belgium between February and September 1917. Blackwood was also awarded the Military Cross for his service with 52 Battalion near Villers-Bretonneux between 24 and 28 April 1918. During the fighting, although he was not required to put himself into danger, he was 'indefatigable in his efforts to comfort the wounded in the forward battle zone.' His award was posted in the London Gazette on 16 September 1918.

In May 1918 Blackwood transferred to 49th Battalion, where he remained until the end of the war. He returned to Australia for leave on 12 December 1918, and was discharged from the AIF on 30 April 1920. Blackwood joined the Citizens Military Forces in 1922, again in 6th Military District, initially as a Chaplain 3rd Class. By July 1932 he had risen to become a Chaplain 1st Class. He was placed on the retired list in April 1946. Blackwood died in 1967.