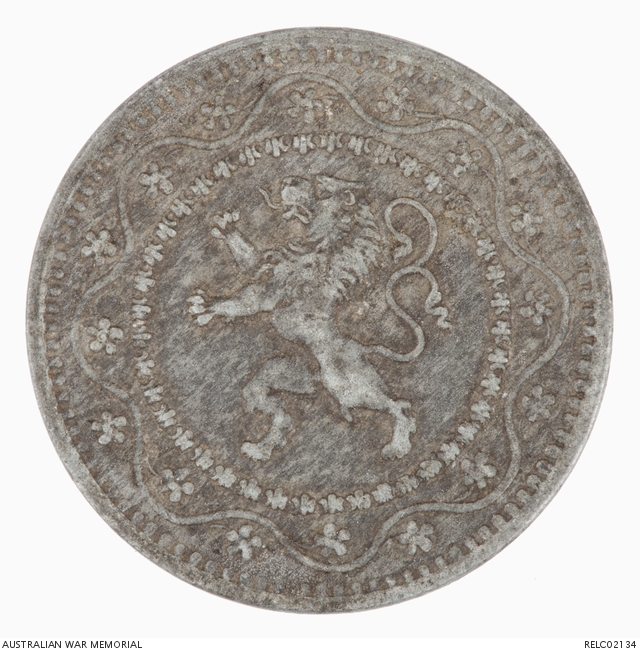 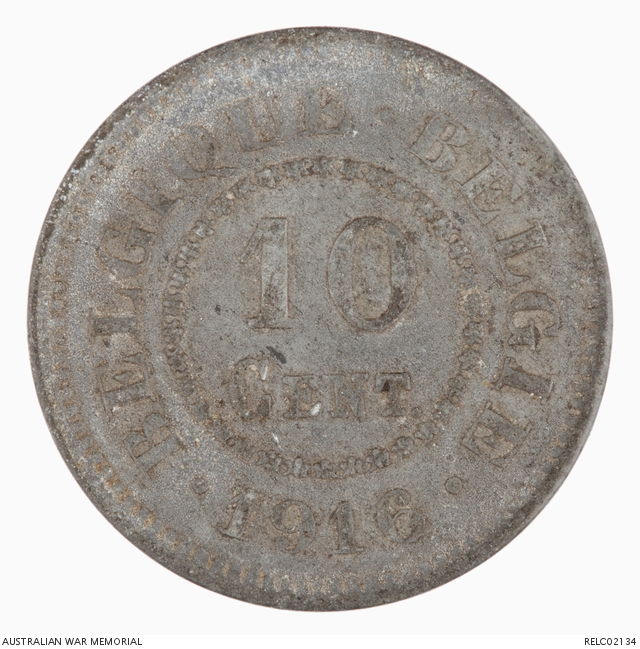 Belgian 10 centimes coin, dated 1916. The coin has both Flemish and French inscriptions, and has been circulated.

Belgian currency minted during the German occupation of Belgium. The Germans disregarded the Belgian currency practice of minting coins with either Flemish or French inscriptions, and instead incorporated both languages into their coinage. During the First World War, international sea blockades forced the Germans to substitute many products with locally available alternatives. Instead of being cupronickel, as the 10 centimes coins had been before the occupation, these coins were minted using locally produced zinc. This coin was collected by Corporal Arthur Charles Hall. Hall was born on 11 August 1896 in Granville, New South Wales. A station hand, he enlisted on 3 April 1916 at Dubbo, New South Wales. He embarked from Sydney on the HMAT Ceramic on 7 October 1916 with 54 Battalion 6th reinforcements. He arrived at Plymouth on 21 November 1916. After two months at the 5th Division Base Depot at Etaples, Hall rejoined 54 Battalion in France on 8 February 1917. He was made acting sergeant on 22 November 1916 and then appointed lance corporal 12 June 1917. He was then promoted to corporal on 4 October 1917. Hall continued serving in France, and for gallantry at Peronne, he was awarded the Victoria Cross. Hall transferred to 56 Battalion on 11 October 1918. He returned to Australia aboard the SS Devanha and was discharged on 3 August 1919. From January 1942 Hall served in Australia with the 7th Garrison Battalion until he was discharged in November 1943. Arthur Hall died on 25 February 1978.