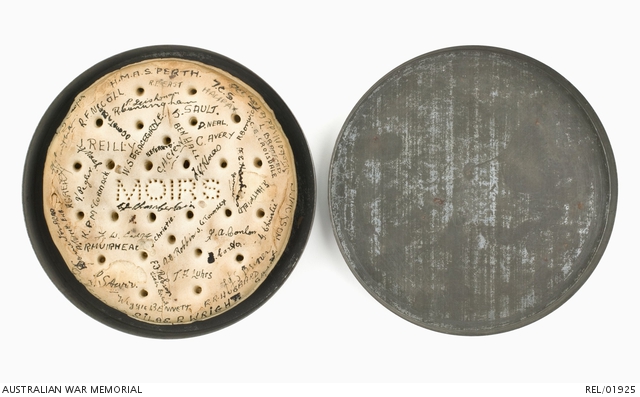 This biscuit was issued to Able Seaman George Mearns when the cruiser HMAS Perth had a two-day stopover in Halifax, Nova Scotia, Canada in October 1939. The Perth had been tasked with hunting a German pocket battleship in the North Atlantic, but with no success the ship berthed in Halifax where she took on a draft of sixty ratings and some stores.

Launched in 1934 as HMS Amphion, the ship was transferred to the RAN in 1939 and renamed HMAS Perth.

Born in August 1910 Mearns joined the Royal Australian Navy in February 1925. Before the Second World War he served in HMA ships Canberra, Australia, Stuart, Perth and Sydney. Mearns joined HMAS Perth on 19 May 1939 and served aboard her until 26 September 1941. At this time Perth was laid up at the Cockatoo Dockyard for an extensive refit.

Mearns later served in the corvettes HMAS Ipswich, Kalgoorlie and Glenelg. He was discharged on 30 August 1945.