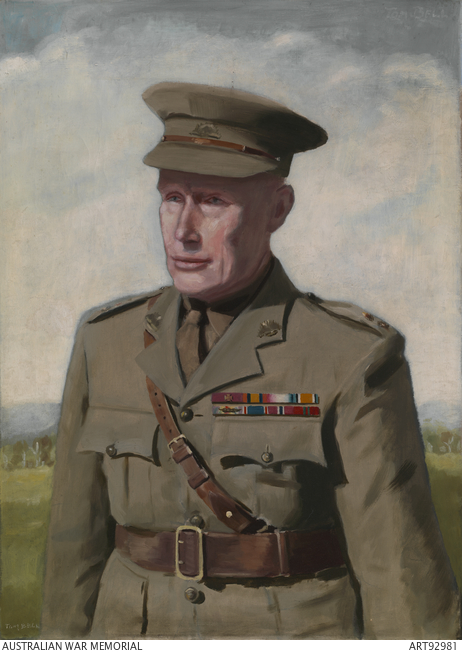 Depicts a portrait of James Ernest Newland VC (1881-1949) who enlisted as a Private with the 4th Battalion, Australian Commonwealth Horse for service in the Boer War. In August 1914 he enlisted with the 12th Battalion in Tasmania and travelled to Gallipoli, where he was wounded. In France Newland was involved in battles at Pozieres and Moquet Farm between July and August 1916. It was here that he was recommended for the Military Cross and the following year fought on the Hindenburg Line and was wounded. In April 1917 he was awarded the Victoria Cross for 'conspicuous courage, bravery and devotion to duty in the face of heavy odds on three separate occasion's during the First World War. He was one of the oldest members of the AIF to be awarded the VC, receiving it at 36 years old. This portrait of Newland was painted when he was in his fifties by Tom Bell Senior an artist, born in Scotland, who came to Australia as a young man. Bell had some artistic training under the tonal painter Max Meldrum (1875-1955) in c. 1920 but was largely self-taught. He is also know to have painted self-portraits, still lifes and completed a number of images of munition workers and Red Cross workers in uniform during the Second World War for the 'war effort'. In 1946 Bell exhibited portraits of 'typical Australian girls' at Prahran Town Hall in Victoria and held an exhibition of watercolour and oil paintings at the Athenaeum Gallery, Melbourne in 1941.