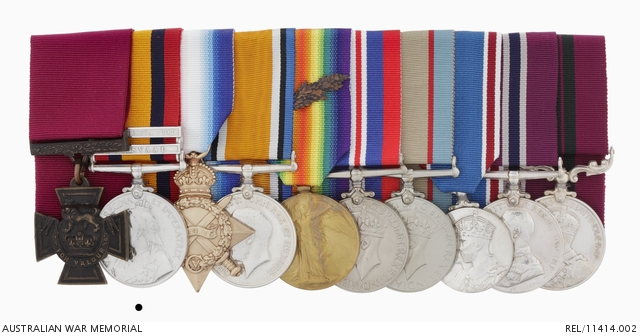 James Ernest Newland was born to William and Louisa Jane Newland at Highton, Victoria on 22 August 1881. Little is known of his early life. He enlisted in the 4th Australian Commonwealth Horse to the Boer War under Lieutenant Colonel George Jamieson Johnston on 11 February 1902. The contingent embarked on board the transport ship 'Templemore' on 26 March. Arriving in Durban on 22 April, hostilities ended before the contingent saw any fighting and returned to Australia in July. Although Newland did not see action while in South Africa it marked the beginning of a military career spanning almost four decades.

Shortly after returning he joined the Royal Australian Artillery in Victoria, serving with the unit for four years before moving to Tasmania. He rejoined the regular army in August 1910.

On 17 August 1914 he transferred to the AIF and was posted to 12 Battalion as regimental quartermaster sergeant. He embarked with his battalion from Hobart on 28 October 1914. Landing at Gallipoli on 25 April, Newland was wounded in the arm during the initial days of the battle and evacuated to Egypt. While convalescing he was promoted to 2nd lieutenant before returning to his unit on 26 May. The following month he was transferred to Egypt to take charge of the battalion's transport. Promoted to lieutenant on 15 October while on Gallipoli, Newland was later evacuated off the peninsula suffering from dengue fever.

During the reorganisation of the AIF in Egypt after the evacuation, Newland was further promoted to captain on 1 March 1916. The unit sailed to France later that same month, disembarking in Marseilles on 5 April. On 5 August Newland was made commander of 'A' Company, leading them in an attack on enemy trenches near Mouquet Farm on the 21st. For his actions during the assault Newland was unsuccessfully recommended for a Military Cross. Early in October a recommendation for a Mention in Despatches covering the same action was forwarded, this time successfully.

In December Newland was evacuated sick then briefly seconded to 2nd Brigade Headquarters. He returned to command 'A' Company on 2 January 1917. In fighting near the village of le Barque on 27 February Newland was wounded leading his company against a German strong point and evacuated. He rejoined his unit on 25 March.

Early on the morning of 8 April, Newland's company was tasked with the capture of the village of Boursies. Newland's initial successes were countered with heavy German artillery and counter attacks. His company suffered over 100 casualties before the enemy was finally forced back. Exhausted, Newland's company was relieved but not before they had blunted the German attack. The town was captured a few hours later.

On 15 April, 12 Battalion was in the front line near Lagnicourt when a massive German attack was launched in an attempt to temporarily occupy the village and destroy Allied artillery and material. Again, Newland's company was in the thick of the fighting. Ultimately the company managed to defend their position against a force estimated at ten times their size before launching a successful counter-attack. For his role in the fighting around Boursies and Lagnicourt, Newland was awarded the Victoria Cross.

On 6 May, during the Second Battle of Bullecourt, Newland was again wounded and removed from the line for the final time. He was evacuated to England and eventually returned to Australia. His appointment with the AIF was terminated on 2 March 1918.

Newland remained with the permanent forces and served as an officer in various capacities in the inter war period. He was promoted to major in 1930 and awarded the Meritorious Service Medal in 1935.

During the Second World War he served as a quartermaster before being placed on the retired list on 22 August 1941 with the honorary rank of lieutenant colonel. James Newland died on 19 March 1949 and was buried at Brighton Cemetery with full military honours.