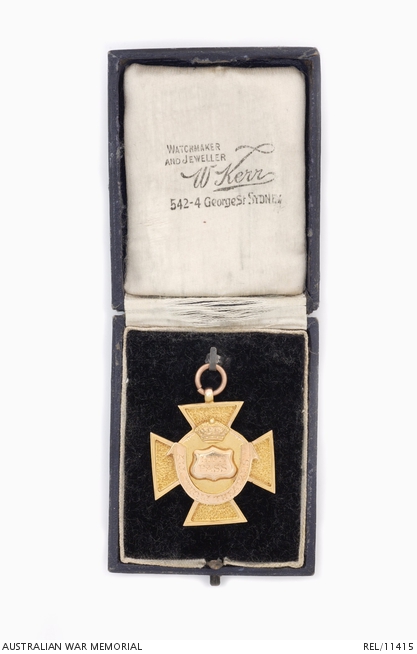 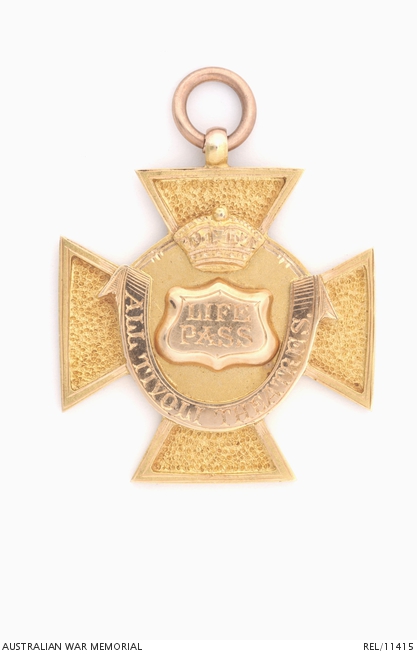 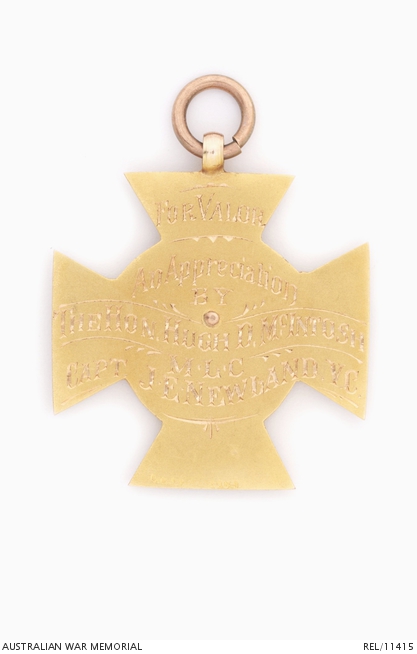 Rose gold and gilded metal Tivoli Lifetime Theatre Pass in the shape of a Victoria Cross suspended from a rose gold link. Below a King's Crown, on the obverse of the cross, are the words, 'LIFE PASS' engraved on a small raised plaque. Underneath the plaque a horseshoe shaped scroll is engraved with the words, 'ALL TIVOLI THEATRES'. There is a pebbled finish on the inside of the arms of the cross. The reverse of the cross is smooth and bears the engraved words, 'FOR VALOR An Appreciation BY THE HON. HUGH D. MCINTOSH M.L.C CAPT. J.E. NEWLAND. V.C.'

Born in Geelong, Victoria,+ on 22 August 1881, Captain James Ernest Newland enlisted in the army at eighteen and saw active service in South Africa. Upon returning to Australia he served with the Victorian Artillery for five years, subsequently becoming a permanent member of the Instructional Staff of the Commonwealth Military Services. Stationed in Tasmania, he transferred to the AIF on 22 August 1914 as regimental quartermaster sergeant of 12 Battalion, embarking on HMAT 'Geelong' on 20 October. Wounded on Gallipoli shortly after the landing, Newland was commissioned second lieutenant on 22 May 1915 and promoted to lieutenant on 15 October. Late in March 1916 Newland, as adjutant with the rank of captain, embarked for France with 12 Battalion. In the battalion's first major battle at Poziéres, during July and August, he was Mentioned in Despatches for distinguished and gallant service. Wounded on 26 February, he returned to his unit shortly before the April advance by the 1st Australian Division to the Hindenburg Line. Captain Newland was awarded the Victoria Cross for 'most conspicuous bravery and devotion to duty in the face of heavy odds on three separate occasions' on 7-9 April at the Bapaume-Cambrai Road, west of Boursies and on 15 April 1917 at Lagnicourt, France. He was invested with the Victoria Cross by King George V on 21 July 1917 at Buckingham Palace and embarked six days later for return to Australia where his AIF appointment was terminated on 2 March 1918. Captain Newland continued to serve as an officer of the Permanent Forces and was awarded the Meritorious Service Medal in November 1935. He retired on 22 August 1941 and died on 19 March 1949. He was buried at Brighton cemetery, Melbourne. At thirty five years of age, Captain Newland was the second oldest member of the AIF to be awarded the Victoria Cross (Albert Borella VC MM at 37 being the oldest). In recognition of their valour the Tivoli management presented Newland and other surviving VC recipients with a life pass to their theatres.