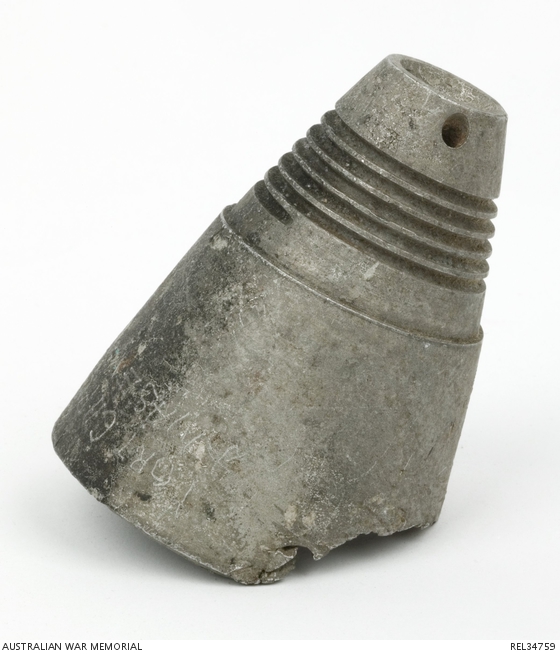 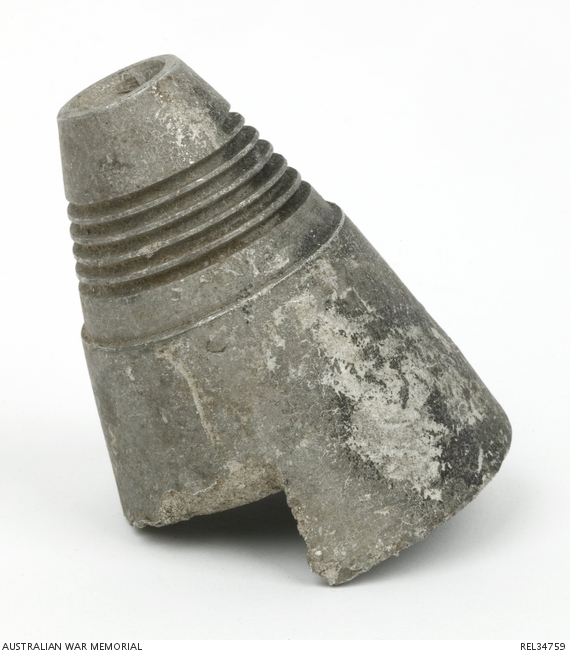 Incomplete aluminium Italian fuze for 102 mm, 35 calibre anti-aircraft ammunition. This time fuze is missing its ballistic cap. The words 'FORT CAPUZZO' and '1940', along with some indecipherable markings have been scratched on the outside of the casing.

This time fuze was collected by Lieutenant Bruce Brock, HQ Company Signals Officer, 2/2nd Battalion at Fort Capuzzo, an old Italian stronghold between Bardia and Sollum, held by the Allies.

Brock was born on 31 March 1907 at Darwin and was working as a school teacher at Woonona. He had been a lieutenant with 34 (Militia) Battalion before he was seconded to the 2/2nd Battalion AIF on 13 November 1939, and given service number NX239. Brock embarked from Australia in January 1940 with 2/2nd Battalion which arrived in Egypt a month later and trained in Palestine till the end of August of that year. Promoted to the rank of captain in July 1941, Brook took part in 2/2nd Battalion's early battles in Bardia and Tobruk in Libya, and afterwards in the Greek Campaign. Brook returned to Australia in mid-1942 via Papua New Guinea aboard the Ambulance Transport Felix Roussel. He was discharged from service in January 1944.

Fort Capuzzo fell to British Forces on 14 June 1940, only four days after Italy declared war against Britain but it was later reoccupied by the Italians until recaptured by the British 4th Armoured Brigade on 16 December. It is unknown whether the gun from which this fuze came was used when with Italian forces, or was used later when captured by the allies. There was a lack of artillery when British forces deployed to North Africa and they reused a substantial amount of captured Italian equipment.

Later possession of Fort Capuzzo in 1941 see-sawed between German forces, who recaptured it in April 1941 and the Allies, but by this time the 2/2nd Battalion had seen action in Greece, so the dating of this fuze can be confidently placed in the period around 22 December 1940, a few days after the 2/2nd Battalion arrived at Salum and were heading towards Bardia. They were based in the area to the west of Fort Capuzzo and were drawing their water from wells at the Fort until 27 December (‘pure but unfortunately it is very salty’); and had a piquet at this position guarding the water. It is likely that Captain Brock collected this anti-aircraft fuze during this period. On the 28 December his battalion moved out of the area towards Bardia which they assisted in capturing on 2 – 5 of January 1941.