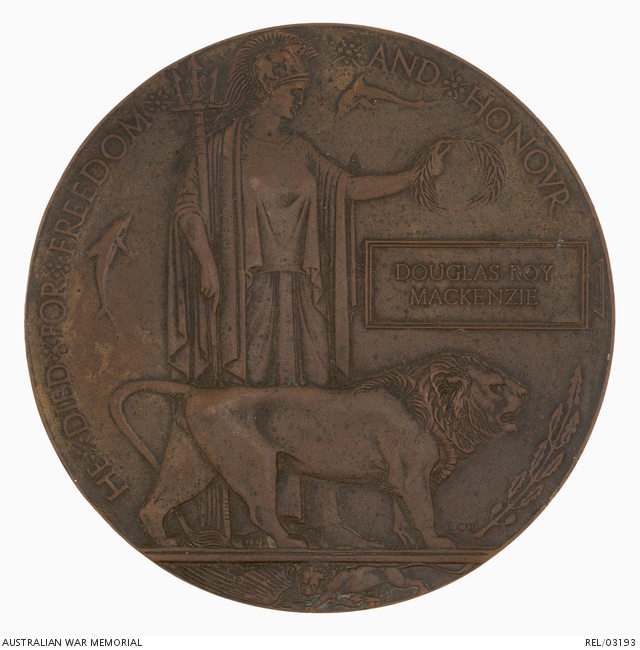 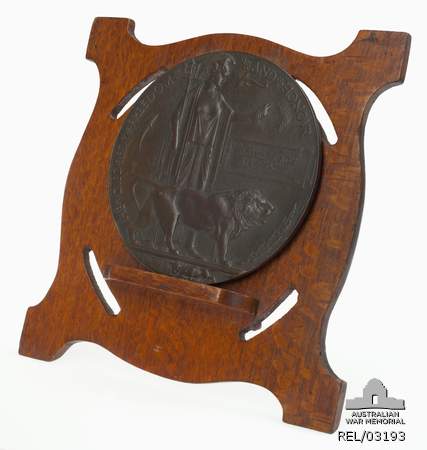 Bronze next of kin plaque, showing on the obverse, Britannia holding a laurel wreath, the British lion, dolphins, a spray of oak leaves and the words 'HE DIED FOR FREEDOM AND HONOUR' around the edge. Beneath the main figures, the British lion defeats the German eagle. The initials 'ECP', for the designer Edward Carter Preston appear above the lion's right forepaw. A raised rectangle above the lion's head bears the name 'DOUGLAS ROY MACKENZIE'. A checker's mark, '90', is impressed between the lion's rear left paw and tail. The mark of the Woolwich Arsenal, 'W' within a circle, is stamped in the back of the plaque.

The plaque sits on a ledge on a silky oak display easel, which has decorative corners and a swivelling wooden leg at the back, supporting it in an upright position.

Douglas Roy Macenzie was born in Sydney in 1899. He had been working as an engineer's apprentice for 2 years when he enlisted in the AIF, with his mother's permission, on 9 July 1917, shortly after his eighteenth birthday. After training at Liverpool Camp in the Technical Battalion, Mackenzie was assigned to the 13th reinforcements for the 1st Pioneer Battalion on 31 August.

Mackenzie sailed from Sydney for service on the Western Front on 31 October, aboard HMAT Euripides. He arrived at Devonport, England on 26 December and was sent to the 4th Training Battalion at Codford. Before moving to France in April 1918, Mackenzie was transferred to the 53rd Battalion. He joined this unit in the field on 12 April, but the following day was transferred to the 14th Field Company Engineers. He rejoined his battalion on 1 June.

Douglas Mackenzie was killed in action near Morlancourt on 29 July 1918, one of nine men in the battalion who died that day. Initially buried at Heilly Cemetery the next day, the exact location of his burial was later lost. His name is listed on the Villers-Bretonneux Memorial.

This commemorative plaque was sent to his parents, Thomas and Jessie Elizabeth Mackenzie, on 13 November 1922.