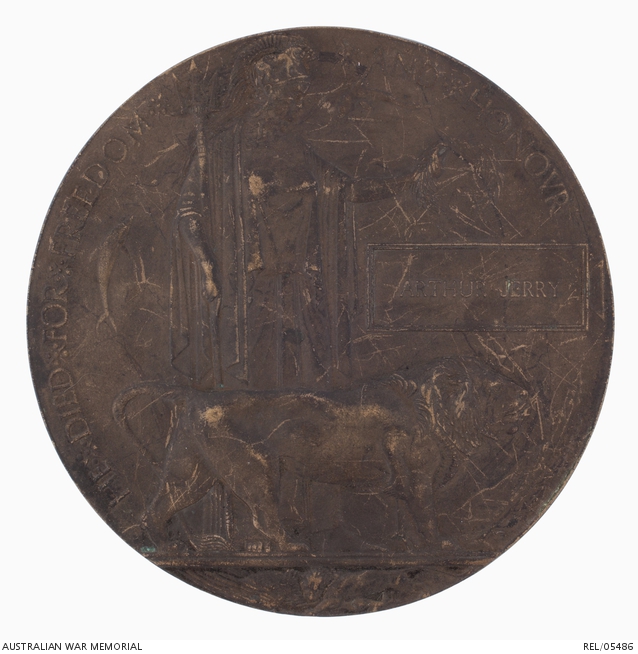 Bronze next of kin plaque, showing on the obverse, Britannia holding a laurel wreath, the British lion, dolphins, a spray of oak leaves and the words 'HE DIED FOR FREEDOM AND HONOUR' around the edge. Beneath the main figures, the British lion defeats the German eagle. The initials 'ECP', for the designer Edward Carter Preston appear above the lion's right forepaw. A raised rectangle above the lion's head bears the name 'ARTHUR JERRY'. A checker's mark, '51', is impressed between the lion's rear left paw and tail. The mark of the Woolwich Arsenal, 'W' within a circle, is stamped in the back of the plaque.

Arthur Scott Jerry was born at Barnsley, Yorkshire, England on 26 December 1893. He had been employed in a solicitor's office before he emigrated to Western Australia in 1912, and was working as a farm hand when he enlisted in the AIF, at Perth, on 4 March 1915.

After initial training Jerry was assigned as private, service number 312, to B Company, 28th Battalion. The battalion sailed from Fremantle aboard the troopship Ascanius on 11 June 1915. Jerry was promoted to corporal in Egypt on 26 August 1915. The battalion arrived on Gallipoli at the end of September. Three weeks later Jerry was evacuated to 7 Field Ambulance, suffering from a septic leg. He returned to his unit a week later. On 21 October he was appointed a temporary sergeant, his rank being confirmed in February 1916, after the battalion had returned to Egypt.

28 Battalion arrived in France on 21 March 1916. On 15 June Jerry was recommended for the award of a Military Medal 'for coolness and daring in carrying out his work as a scout sergeant both on Gallipoli and in France'. He took part in the battle of Pozieres between 28 July and 6 August in which nearly three quarters of the battalion became casualties. Immediately after the battle Jerry was sent to England to undertake officer training. He was commissioned a second lieutenant at the end of October and returned to his battalion in France in December.

On 26 March 1917 the battalion took part in the battle of Lagnicourt. The battalion's war diary for that day reported: 'The fighting in the village was severe and the enemy launched two counter attacks - The first nearly succeeding owing to there having been no troops of the Division on the right up - This attack was finally repelled partly by the efforts of a party under 2 Lieut JERRY who, after destroying the enemy, returned with only one man left out of the whole of his party.' Later in the day Jerry was wounded by a shell blast. He was carried to a dressing station between Lagnicourt and Vaulx but died soon after admission. Initially buried near the dressing station, his body was later moved to the Queant Road Cemetery at Buissy, France.

This commemorative plaque was sent to Jerry's mother, Elizabeth, in December 1922.