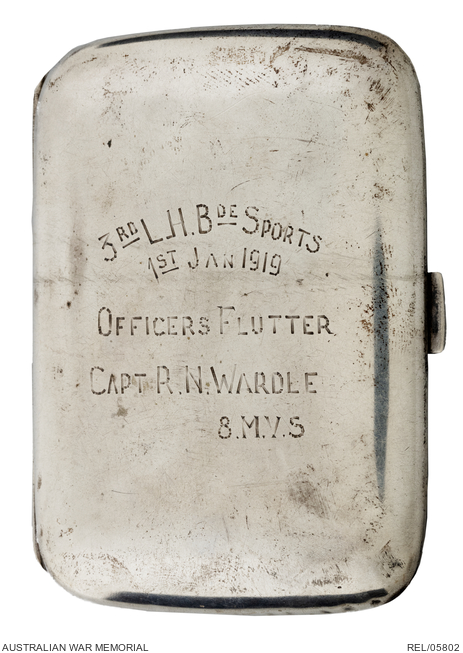 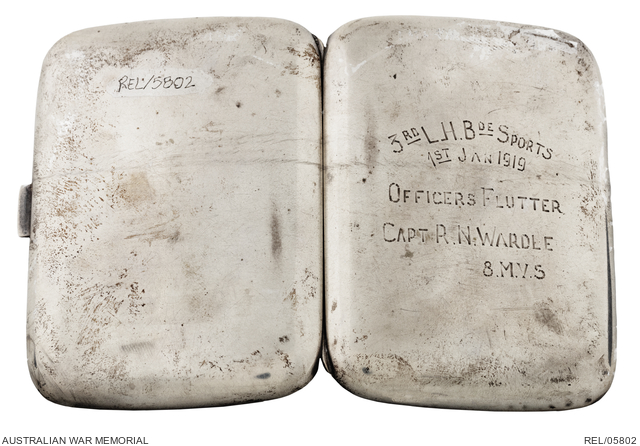 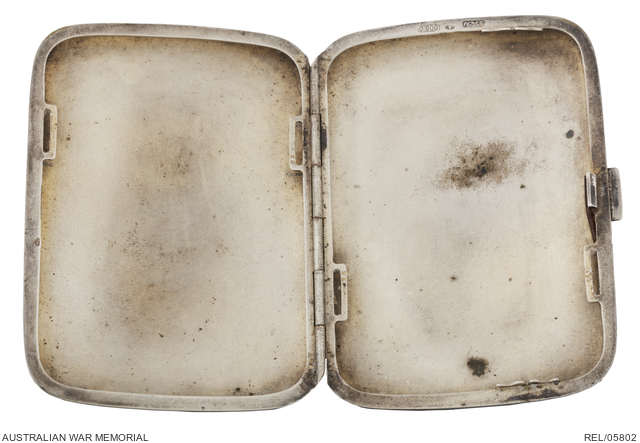 Silver cigarette case with sprung latch. The lid is engraved '3RD L.H.BDE SPORTS / 1ST JAN 1919 / OFFICERS FLUTTER / CAPT R.N. WARDLE / 8 M.V.S'. Fitted to each side of the interior of the case are a pair of integral supports for elastic holders, which are no longer present. One side is impressed '0.800 (symbol) Achef'.

Cigarette case won by Captain Robert Norman Wardle, Commanding Officer of 8 Mobile Veterinary Section, 3 Light Horse Brigade (3LHB) for winning the 'Officers and Troopers Flutter' horse race on his mount 'Robin Hood' in the 3LHB Sports Day held on 1 January 1919 at a camp just southwest of Tripoli, Palestine. Captain Wardle, a veterinary surgeon from Ballarat, Victoria, enlisted on 6 March 1917 and embarked for overseas service aboard HMAT Boorara on 10 May 1917. In later years his wife noted that horses were one of his 'lifelong interests - he was a fine horseman and a skilled veterinarian'. Wardle considered his win on 'Robin Hood' noteworthy enough to enter in the War Diary for 1 January 1919, while the 3LHB War Diary described it as 'a very successful meeting providing a good days entertainment for all ranks'. Wardle returned to Australia on 10 July 1919. Following the surrender of Turkish forces on 31 October 1918, 3LHB had moved from Syria to Tripoli in northern Palestine on 6 November. The Sports Day was held during a major rest and relaxation period prior to preparing to move by sea to Moascar, Egypt on 22 February to start the procees of demobilisation. This was interrupted by a rash of political unrest and violence through northern Egypt in March; all Australian troops were re-equipped and sent to the Zagazig District on 15 and 18 March 1919 to deal with the disturbances. The hallmark on the inside of the case appears to indicate German manufacture. Captain Wardle later descibed his experiences in the Middle East and his talk was recorded - see PASU0133.011.