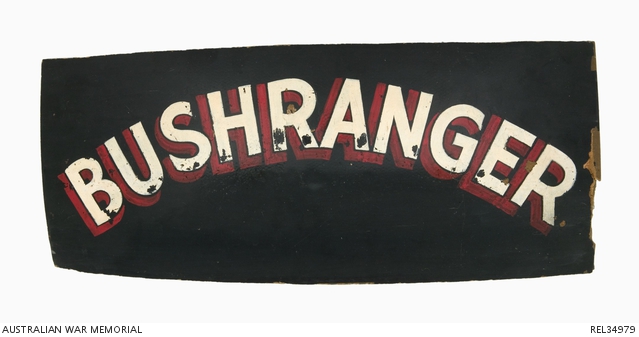 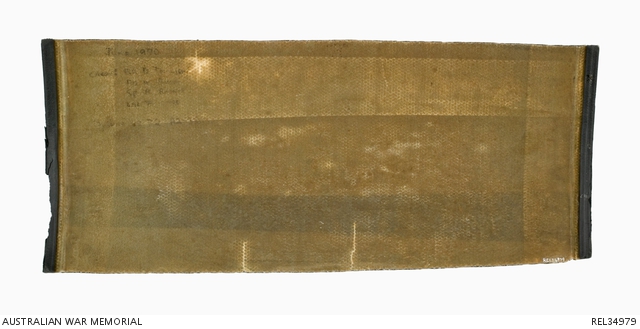 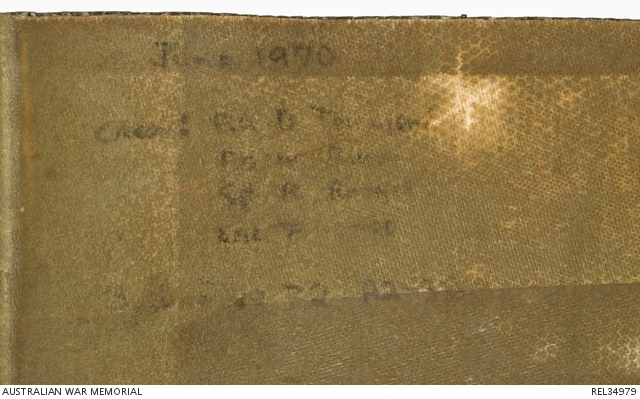 Electronic Equipment Compartment Door from Bell UH-1H Iroquois Helicopter: A2-382. This is a section cut from the door assembly using a saw, with the cuts across the upper and lower edges. The sides are intact with the exception of several chips from the port edge. The edge also retains original rubber gasket strips. The exterior surface has been painted black with the word "BUSHRANGER" in cream sans serif lettering with red shadowing. The inscription spans the width of the door. Beneath this top layer is the remains of the original surface finish of olive drab camouflage. On the rear surface, the section retains its original unpainted finish. In the upper port corner is the inscription "JUNE 1970 CREW: FO B Townsend FO W Bowen, Sgt R Ranger, LAC (unreadable) 20 June 1970 A2-382"

This section of door was acquired by Flying Officer Warren Louis Bowen after RAAF Iroquois helicopter A2-382 was recovered from a beach and returned to the base at Vung Tau for parts recovery. The ground staff cut down the damaged door and presented the insignia to Bowen.

Bowen was born on 3 June 1948 and began training as a pilot on 28 June 1968 at No 1 Basic Flying Training School, RAAF Base Point Cook. Bowen successfully completed his basic training and continued onto the Advanced Flying Training Course at RAAF Base Pearce flying CA-25 Winjeels and de Havilland Vampires. Bowen was awarded his pilot’s brevet (wings) on 28 November 1968 before proceeding to No 5 Squadron, RAAF Base Fairbairn where he flew Iroquois helicopters. Bowen remained at Fairbairn until arriving in Vietnam as a member of No 9 Squadron RAAF on 18 February 1970. On 20 June 1970, Bowen was co-piloting RAAF Iroquois helicopter A2-382 with 224152 Flying Officer Bruce Charles Townsend when the aircraft was hit by Vietcong ground fire over the Long Hai Hills of South Vietnam. The helicopter was hit twice, once in the fuel tank and once in the engine. Fuel drenched the crewman and flowed into the cabin as the helicopter made an emergency landing on a beach about two miles from the scene of the action. This resulted in further damage to the aircraft from sea water before it could be recovered the next day. The Iroquois had also suffered severe structural damage with the tail-boom completely ripped away from the fuselage. The helicopter, a bushranger gunship had earlier made three passes over a Vietcong position, firing side guns, mini-guns and rockets as part of an evacuation operation involving two companies of South Vietnamese troops. A2-382 was replaced by A2-110 after the latter was modified for gunship operational flying.