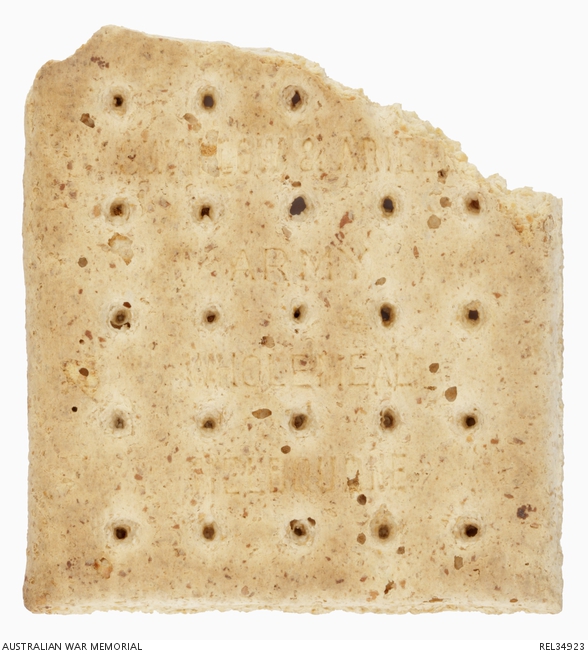 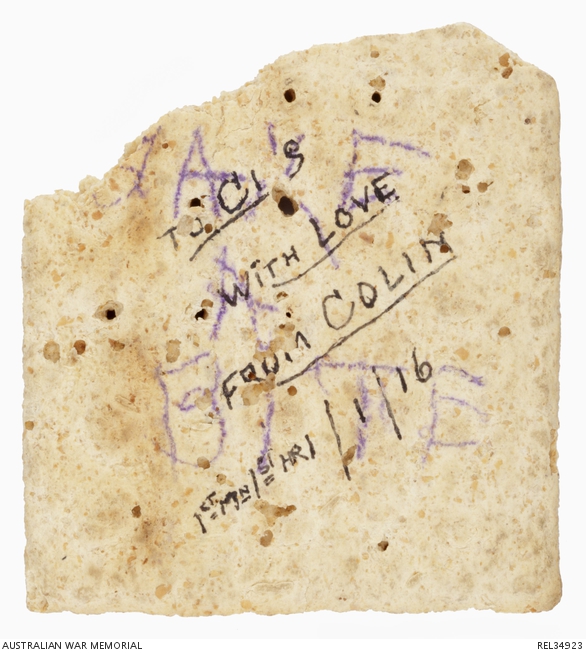 Square wholemeal, army issue hard tack biscuit with one corner missing. The words 'SWALLOW AND ARIELL ARMY WHOLEMEAL MELBOURNE' are impressed into the biscuit on one side, while the following has been written in black ink on the other side of the biscuit: 'To Cis WITH LOVE FROM COLIN 1st Mn 1st Hr 1/1/16'. Overwritten crudely in purple are the words 'HAVE A BITE'.

Army biscuit with a message written on the first minute of the first hour of 1 January 1916, sent to his sister by 5320 Sapper David Colin Grumont from Broadmeadows training camp where he was attending Signals School. Grumont, born Upper Macedon, Victoria in 1897 enlisted on 7 June 1915 aged 18 with his mother's permission. He was one of four Grumont brothers to enlist. His eldest brother, 3062 Sergeant Charles Albert, enlisted six days after David and was assigned to 59 Battalion; his next eldest brother, 5319 Sapper James Lindsay enlisted on 3 July 1915 and was assigned to 2 Division Signal Company; while his younger brother, 2nd Lieutenant Arthur Laughlan had enlisted on 21 August 1914 and served with 49 Battalion. After initial training and assignment to 2 Division Signal Company, David embarked for overseas service from Melbourne aboard HMAT Afric on 9 February 1916; his brother James embarked on the same ship. Within a week of arriving in Alexandria, he embarked for France aboard HT Oriana, landing at Marseilles on 27 March 1916, whereupon he almost immediately contracted mumps, as did his brother James. Both men remained in hospital until mid May. Both Colin and David transferred to 5 Division Signals Company in mid August 1916. In late January 1917, Colin was admitted to hospital at Rouen with foot problems and did not rejoin his Company until early April. His brother Sergeant Charles Grumont died in action in no mans land at Fleurbaix on 19 July 1916 when hit in the head and chest assaulting German lines. Colin was gassed on 31 October 1917 and spent many months recovering in England; he was not able to return to active service until 10 June 1918. He was only in the field for ten days before he was wounded and died from his wounds the same day. In a letter to James Grumont dated 30 September 1918, Lieutenant George Norman Dixon, MC, also of 5 Divisions Signals Company reported: 'He rejoined the Coy on 6 June and was temporarily posted to my sector, where heavy casualties had been inflicted. He was in a billet at Heilly and a shell landed in it. The occupants were Colin and a driver named Whitney. Colin was hit in the legs, body and head and soon expired. Whitney lost his right arm. Colin's body was buried in Franvillers Communal Cemetery. A cross has been prepared and will be erected by Company over the grave as soon as they have the opportunity - so much rapid movement of late has delayed this being done.' Colin's companion was 18810 Sapper Bert Whitney, who adds 'He was hit about 2 pm and died about 4 hours later, not regaining consciousness.'