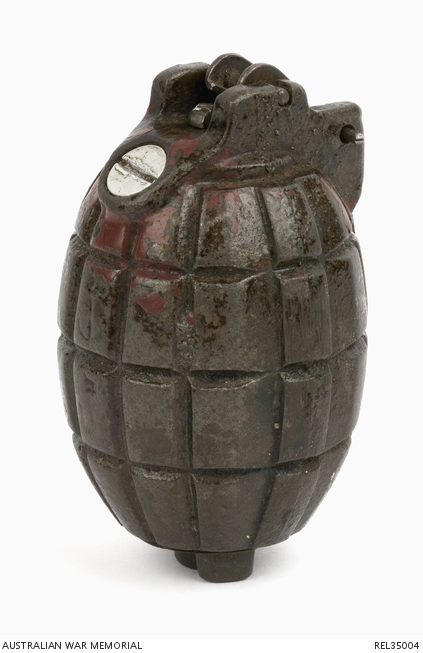 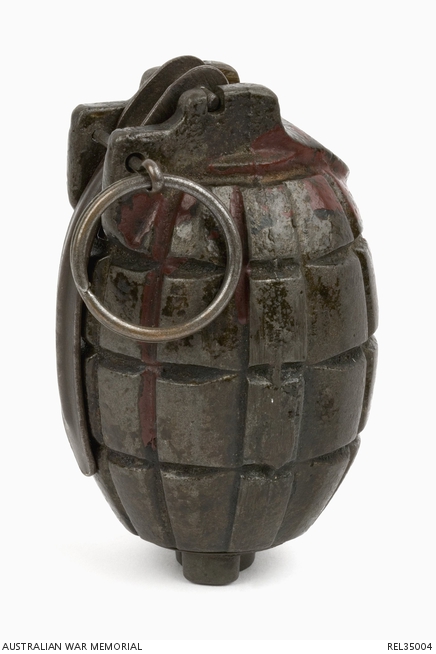 Mills No 23 Rifle Grenade (inert). The grenade is externally complete, with impressed markings on the base plug which read 'M.M.Co No 23. M.II'.

Grenade collected by George Edgar Watkins. Watkins was born in Malvern, England, and later immigrated to Australia. Watkins enlisted for service in the AIF in Melbourne on 10 February 1916 aged 23 years. He embarked with 39 Battalion for the Western Front in May of that year, serving in the scout section of the battalion. He was promoted to the rank of corporal in August 1917, then to sergeant in May 1918. On 4 June 1918, Sergeant Watkins was awarded the Distinguished Conduct Medal for as 'leader of numerous patrols, he has been the means for securing valuable information in No Man's Land'. During the war, Watkins kept an extensive record of his daily routines and nightly patrols in diaries and also detailed information in the form of notebooks, hand-drawn maps, plus original photographs. A diary entry from 18 May 1918, provides insight into the nature of the nightly patrols undertaken by Watkins. He wrote: 'Lt August, Lt Miles and Lt Stanley the engineering officer, Scouts Brown, Williams and myself with 20 other men formed a fighting patrol. Moved out in advance of our line for the purpose of finding a good position so that we could advance our posts. The night was very dark and wet. The enemy opened fire on us from his trenches. We returned without a casualty.' Watkins also collected a vast array of artifacts from the battlefield during the war including a German Mauser Model G98 Rifle and a German flare pistol. All are held in the Memorial's collections. At the end of the war Watkins returned to his to his pre war occupation as a painter in Melbourne. He later married a girl he met while on leave in England during the war, and together they raised a daughter. George Edgar Watkins passed away in 1967.