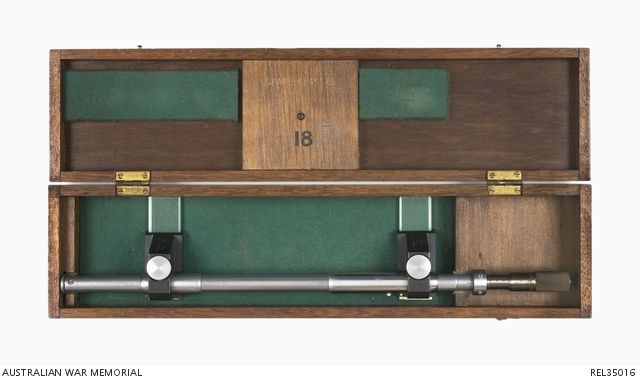 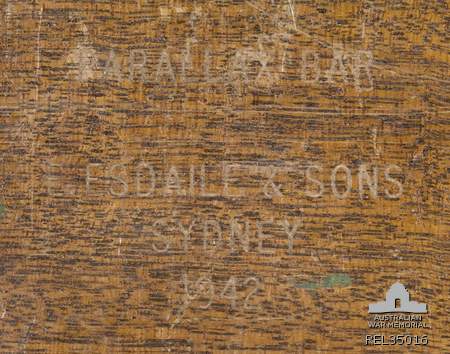 Stereometer parallax bar in wooden case. This instrument is comprised of two glass plate holders mounted on a centerless-ground, stainless-steel bar. A precision micrometer is attached by four screws to the end of the bar on the right hand side. The micrometer thimble has 45 graduations, each being 0.01 millimetres while the longitudinal line on the micrometer spindle is graduated with one millimetre divisions and 0.5 millimetre subdivisions. The left hand glass holder is adjustable along the bar by the use of set screws while the right hand glass holder is moved by adjusting the precision micrometer. Each glass plate contains a measuring dot for use in the fused dot method of measuring elevation differences. Inscribed on the front of the right hand glass holder is 'E. ESDAILE & SONS SYDNEY 1942' with 'PARALLAX BAR No 8 D^D' inscribed on the left hand glass holder. The wooden case has two recessed fittings to securely house the parallax bar. The case is lined with green felt and is fastened by two brass latches, one of which is missing. The case is inscribed 'SPARE GLASSES' and '18' on the inside of the lid while 'PARALLAX BAR E. ESDAILE & SONS SYDNEY 1942' is inscribed on the outside of the lid.

The parallax bar is an instrument designed for use with a mirror stereoscope that has a stereo base of ten inches or less. The bar is used to determine the height difference of natural and man made features when viewing stereoscopic photographs. It measures the relative position of identical points in both photographs, that is their parallax difference. The parallax difference can then be used to compare the relative heights. Differences in elevation as great as 2000 feet can be measured.
This parallax bar was one of only 201 made by E. Esdaile and Sons for the Optical Munitions Panel during the Second World War. The Panel was formed in June 1940 to equip the Australian Army, Navy and Air Force with optical instruments and to keep Australia's essential civil production going. Each senior physicist on the Panel was given several optical instruments to design, which would then be manufactured by local industrial firms, although often in small numbers.
E. Esdaile and Sons was founded by William Edward (Edward) Esdaile (1858/9-1947) in 1891under the name E. Esdaile, Optician. The company was first located at 11 Hunter Street, Sydney and identified instrument manufacturing as their core business. By 1924, the firm had relocated to 42 Hunter Street and had changed its name to E. Esdaile and Sons. Edward Esdaile Junior (Jnr) worked on the manufacture of scientific instruments, his brothers Ernest and Leonard developed the Optical Department and his brother Charles was the firm's accountant. Edward Senior (Snr) continued to manage the business until 1925; thereafter it was managed by Edward Jnr.
E. Esdaile and Sons were kept busy throughout the Second World War with orders for surveying equipment, ship's compasses and gun sights. To keep production abreast of demand, the firm was sufficiently capitalised to employ 60 staff at this time. When Edward Snr died in 1947, an application was made to make Esdailes a public company. This was achieved on 21 July 1948, with Edward Jnr becoming Managing Director and consequently the firm was renamed E. Esdaile and Sons Pty Ltd. There was another name change in 1953 to Esdaile (Holdings) Limited.