Fuze Curves for 3.7 inch anti-aircraft gun and Predictor No. 5 Mk I 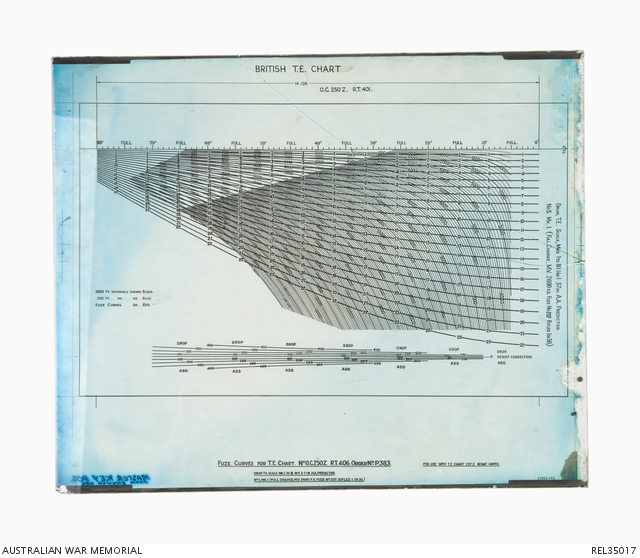 This glass plate was used to assist in the adjustment of anti-aircraft firing settings for a 3.7 inch anti-aircraft gun. It was also used in conjunction with the Predictor No. 5 Mk. I The plate was found by the donor in the garage of the late Edward “Ted” Esdaile Junior (Jnr) at 39 Ponyara Road, Beverly Hills, Sydney in 1979. Esdaile was the son of William Edward (Edward) Esdaile founder of E. Esdaile and Sons, an instrument manufacturing business founded in 1891 under the name E. Esdaile, Optician. The company was first located at 11 Hunter Street, Sydney but by 1924, the firm had relocated to 42 Hunter Street and had changed its name to E. Esdaile and Sons. Ted Esdaile (Jnr) worked on the manufacture of scientific instruments, his brothers Ernest and Leonard developed the Optical Department and his brother Charles was the firm's accountant. Edward Senior (Snr) continued to manage the business until 1925; thereafter it was managed by Edward Jnr.
When Edward Snr died in 1947, an application was made to make Esdailes a public company. This was achieved on 21 July 1948, with Edward Jnr becoming Managing Director and consequently the firm was renamed E. Esdaile and Sons Pty Ltd. There was another name change in 1953 to Esdaile (Holdings) Limited.
It is possible that this glass plate was manufactured by E. Esdaile and Sons for the Optical Munitions Panel, which was formed in June 1940 to equip the Australian Army, Navy and Air Force with optical instruments. E. Esdaile and Sons were one of a number of local industrial firms employed by the Panel to manufacture optical instruments designed by senior physicists on the Panel.