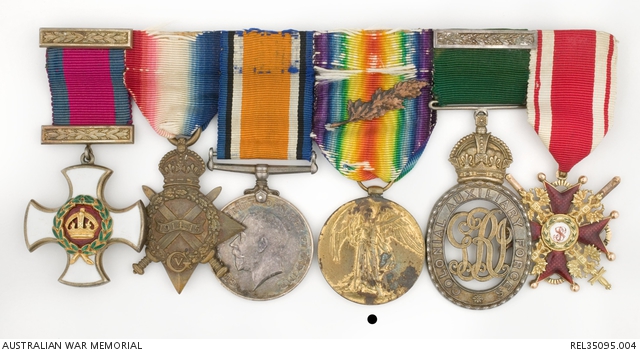 William Kenneth Seaforth Mackenzie was born on 7 January 1872 in Sydney. He was educated at Sydney Grammar School, the University of Sydney and in 1891-95 at St John’s College, Oxford (Bachelor of Arts, 1894). He was called to the Bar at the Inner Temple, London, on 18 November 1895, and admitted to the New South Wales Bar on 2 March 1897. He practiced in Sydney with Bowman & Mackenzie in 1898-1900, specialising in divorce and tenancy consultations. At the age of 26 he was commissioned in the New South Wales Military Forces in the 5th Infantry Regiment (Scottish Rifles). He was then appointed to lieutenant in 1900, captain in 1903; major 1907; lieutenant-colonel 1911, occupying staff and regimental appointments in the 5th Regiment and then in the 1st Battalion, New South Wales Scottish Rifles. He commanded the latter from 1909 and from 1912 the 25th Infantry. On 27 April 1915 Mackenzie joined the AIF as lieutenant-colonel commanding 19 Battalion. Embarking for Egypt in June, he landed on Anzac on 21 August where 19 Battalion took command of Pope’s Hill. He remained at Anzac until the evacuation. On 18 January 1916 after employment at the Suez Canal 19 Battalion embarked for France. It was here Mackenzie was awarded the Distinguished Service Order for his exploits in entering the forward trenches of Pozieres on 5 August 1916. The Battalion was moved to Ypres in September and in November it entered the front line at Flers. On 14 November the battalion participated in an attack on The Maze. Mackenzie commanded 19 Battalion on the Somme during the winter of 1916-17, and was mentioned in dispatches. The citation reads: 'For conspicuous good service and devotion to duty at Battalion Commander during operations on the SOMME October, 1916 to February, 1917. A keen and capable officer'. It was here he fell ill and was evacuated to England in February 1917. He returned to France on the 15 March but went back to England to take command of the 61 Battalion in a projected AIF 6 Division. The division was never formed and in November Mackenzie was appointed to command 2 Australian Division Base Depot. In December he took command of the Australian Infantry Base Depot at Le Havre and relinquished command in June 1918 and on 23 July was attached to 23 Battalion. He was also awarded the Imperial Russian Order of St Stanislaus 3rd Class. He was also awarded the Imperial Russian Order of St Stanislaus 3rd Class which only 4 Australian's have been issued. On 19 February 1919 he sailed for Sydney and on 6 June was demobilized.