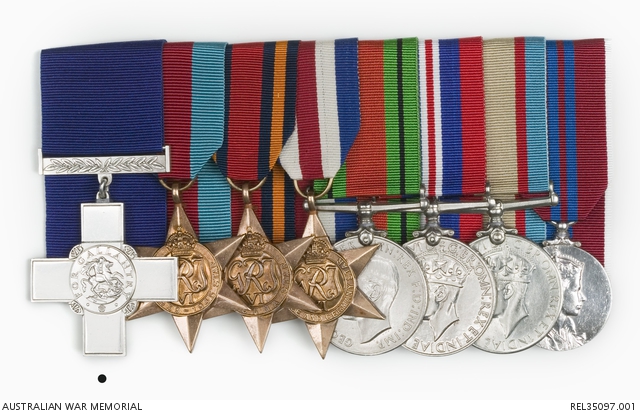 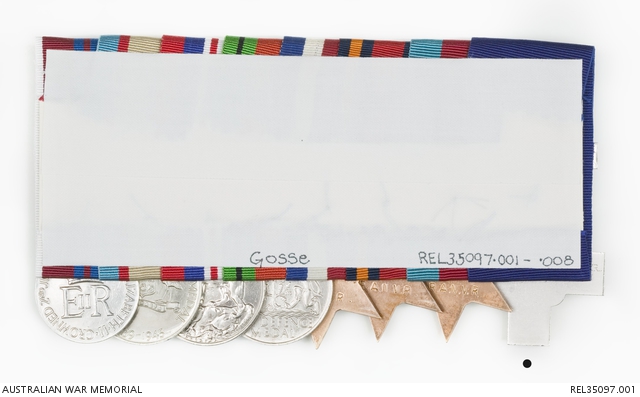 Awarded to Lieutenant George Gosse, Royal Australian Naval Volunteer Reserve (RANVR). Born in Harvey, Western Australia on 16 February 1912, Gosse was educated at the Collegiate School of St Peter, Adelaide and in 1926, entered the Royal Australian Naval College, Jervis Bay. He served in HMA Ships Canberra and Australia and in 1931 went to England for further sea-training and courses with the Royal Navy. However, after twice failing his examinations for lieutenant, he was sent home to Australia and his appointment terminated in October 1933.

On 21 October 1940 he enlisted as an ordinary seaman in the RANVR and was commissioned sub lieutenant in April 1941 while posted to HMS King Alfred. In December he joined HMIS Hooghly at Calcutta, India, as mine disposal officer and was made provisional lieutenant in February 1942. From late 1944 Lieutenant Gosse served in HMS Vernon at Brixham, Devon, England, the base for the RN's port-clearance diving operations in Europe and in April 1945 was sent to Breman, Germany after the capture of that port.

Gosse was awarded the George Cross for his actions in dis-arming mines in Breman Harbour during May 1945. The citation for the award reads:

'Divers searching the Undersee Hafen had reported a sighting of what appeared to be a new form of mine and, on the 8 May, Gosse dived and verified that it was a A G.D. pressure mine known as the 'oyster'. Gosse was given the task of recovering the device intact and dived the next day to remove the primer, with improvised tools, rendering the device safe. During this procedure he heard a loud noise which, upon examination after the mine was brought to land, was found to have been caused by the detonator firing as the primer was removed. He later defused two similar mines which were posing a danger to shipping, on both occasions the detonator fired before the mine reached the surface'.

Gosse was promoted to acting lieutenant commander on 30 September 1945 and demobilized on 20 March 1946. In 1953 Gosse was chosen as a member of the coronation contingent which went to England in HMAS Sydney. He died at Maslin Beach, South Australia on 31 December 1964.