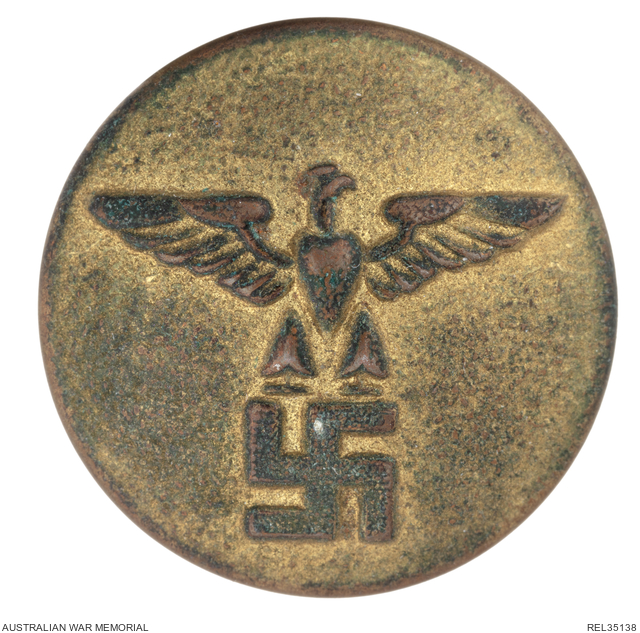 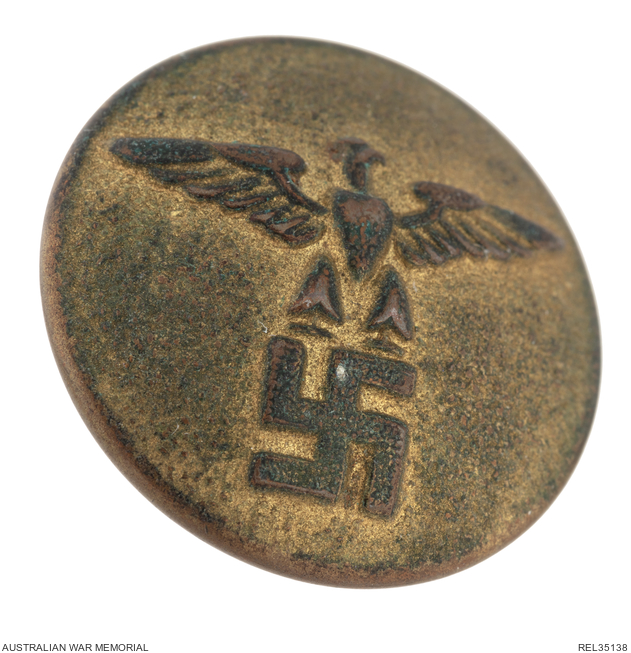 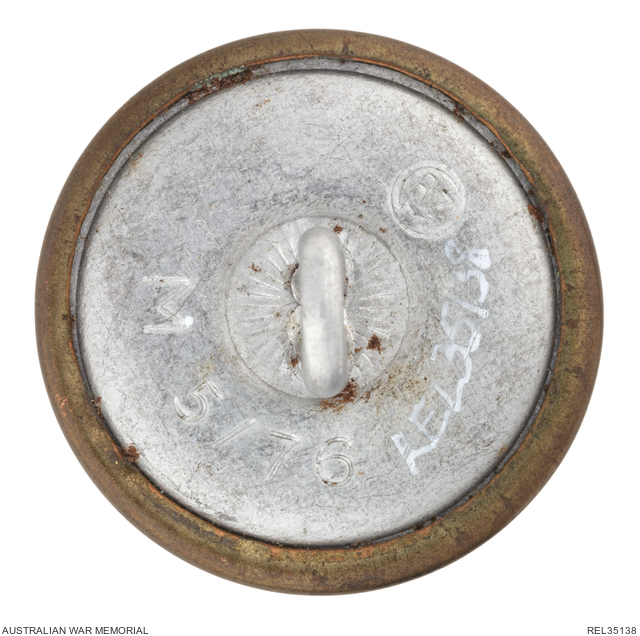 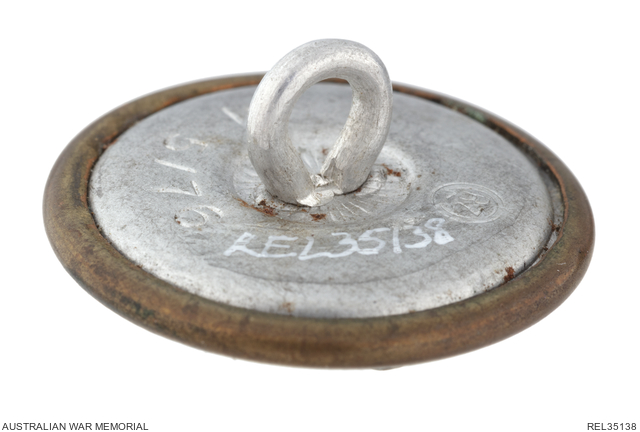 Circular, brass NSDAP (National-Sozialistische Deutsche Arbeitpartei) button. The surface of the button is lightly pebbled with a Nazi eagle over a static swastika embossed on the front. The reverse of the badge is stamped 'RZM' and 'M 5/76' with a single attachment lug soldered .

Associated with the service of Flight Sergeant Norman Macdonald. Macdonald was born in Glasgow, Scotland on 15 September 1911 and spent his formative years there before immigrating to Australia in 1937. He enlisted in the RAAF in Sydney on 11 October 1941 and was posted to No 2 Initial Training School with the rank of aircraftman. Promoted to leading aircraftman on 31 January 1942 he qualified as an observer on 27 March after completing the No 23 Aircrew Course (Observer).

Macdonald embarked for Canada on 25 May as part of the Empire Air Training Scheme. Arriving in Quebec on 20 June he was attached to the Royal Canadian Air Force and proceeded to join No. 1 Ontario Air Observers School for advanced training. Macdonald qualified as a navigator and was promoted to sergeant (T) on 9 October.

Embarking for the United Kingdom on 27 October Macdonald disembarked in Bournemouth on 5 November. He was attached to No 9 (Observers) Advanced Flying Unit in Wales from 14 December before being posted to No. 2 Operational Training Unit in March 1943 and 1656 Heavy Conversion Unit in May.

Attached to 460 Squadron RAAF as a flight sergeant (T) on 29 June, Macdonald flew 17 operations as a navigator before transferring to 156 Squadron RAF. He joined the crew of Lancaster JB472 as navigator and flew his first mission on 23 November - a night raid on Berlin. This was closely followed by another night mission to Berlin on 26 November.

On 2 December JB472 took off from Warboys airfield for their third raid on Berlin. In a report given by Macdonald after the war he describes what happened to their aircraft as they flew over eastern Germany: 'Attack by enemy fighter reported by rear gunner - pilot acknowledged, took evasive action and just then we were hit. Crew put on chutes aircraft in steep dive. At approx between 17 and 15, 000 feet violent explosion. I was sucked out the starboard side of aircraft. Regained consciousness at approx 4,000 feet opened 'chute landed ok. I believe pilot jettisoned bombs endeavouring to save crew and aircraft but aircraft crashed 20 miles north of Hannover. The next day I was captured in the goods yard of the village railway station by 2 German soldiers who were searching for me and taken to identify wreckage of aircraft from which German officials had removed the bodies of my 6 colleagues. Taken to Frankfurt for interrogation put into solitary confinement then to Stalag IVB.'

Statements taken from witnesses on the ground indicate they saw Lancaster JB472 approaching the village of Westenholz on fire and without one of its wings, which appeared to have exploded. The aircraft crashed with bombs still on board approximately 500 metres south of Westenholz.

Stalag IVB prisoner of war camp was located near the town of Muhlberg just off the Elbe river. Macdonald was interned from 18 December 1943 until he was liberated on 23 April 1945. He was promoted to Warrant Officer (T) on 9 April 1944.

Macdonald was formally discharged on demobilisation on 2 March 1946.