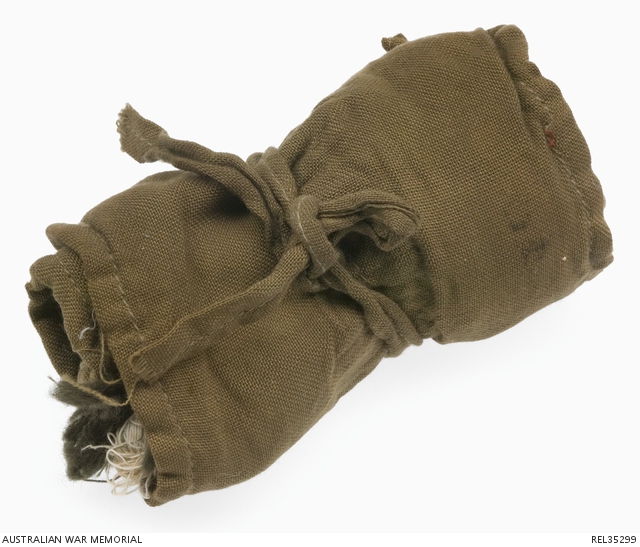 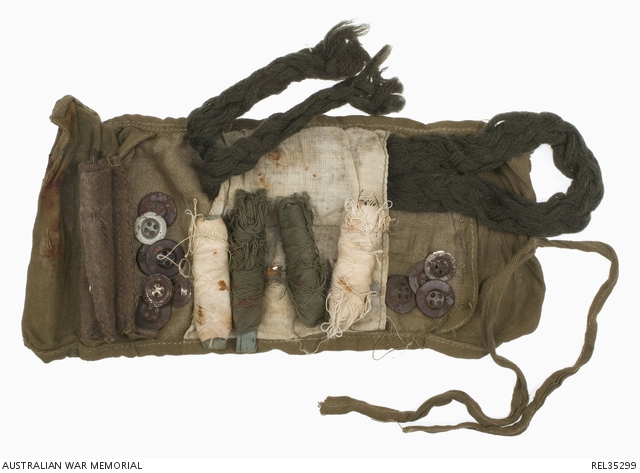 Rectangular khaki cotton housewife. At one end is a length of khaki cotton tape so that the two ends can be tied together to secure the housewife when is rolled up, securing the contents. There a pocket at each end, one empty and one containing nine metal buttons - four small and five large. This pocket also has a piece of brown felt sewn to it to hold needles or pins; three needles - two large and one medium - are threaded through it. In the centre of the housewife, is a white cotton sleeve attached centrally and divided into two segments. One segment contains a length of plaited olive green darning wool, the other is empty. Four spools of cotton thread, two white and two khaki, are held within the housewife when rolled.

Associated with the service of 2332 Private Tennyson Bodel of 58 Battalion AIF, who was born on 27 May 1893. He was a 21 year old blacksmith when he enlisted in the AIF on 14 September 1914. Bodel embarked with 1 Australian Reserve Park, 10 Company Australian Army Service Corps (AASC) from Melbourne aboard HMAT Armadale on 20 October.

After training in Egypt for several months he embarked for Gallipoli on 7 August 1915. Bodel returned to Egypt at the end of the Gallipoli campaign, and was transferred to 29 Company, AASC in March 1916. He was promoted to lance corporal in April. In June he embarked for France to serve on the Western Front.

In 1917 he continued to serve in France, excluding 11 days leave in England in October. In April 1918 he was absent without leave twice; the first time for two days, for which he was reduced in rank to driver, and the second for three days a few weeks later. In May 1918 his rank was reduced to private at his own request and he was transferred to the 58th Infantry Battalion.

On 8 July 1918, Bodel received shell wounds to both legs. That morning the Germans had been heavily shelling 58 Battalion's front line and it was presumably during this bombardment that he was wounded. He was transferred to hospital in England and was not discharged until December, after the war had ended. With the war over he remained in England, and was granted 75 days '1914 leave' with pay. On 25 August 1919 Bodel married Clara Shearn and they both returned to Australia aboard the Marathon, arriving on 1 January 1920. Bodel was discharged on 15 January 1920.

Bodel served again during the Second World War. He enlisted in the CMF on 25 July 1940, and was allocated the service number N77252. He served with the 16th Garrison Battalion, before being discharged on 12 April 1941.