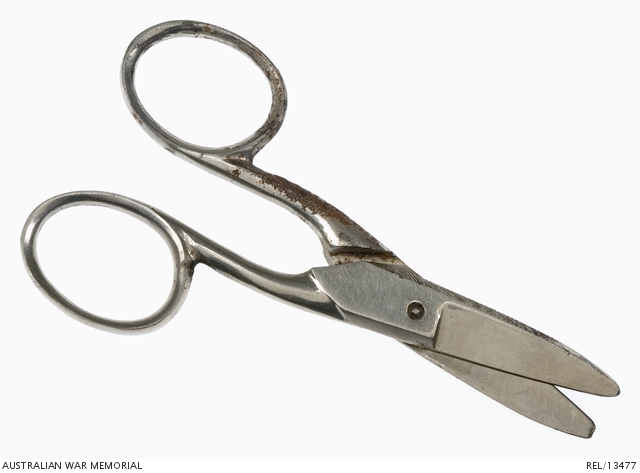 Pair of steel multi purpose scissors.The outer edges of both blades have a textured finish for use as a nail file. Both points are worn or broken.

Pair of multi-purpose scissors carried by Private Arthur Stanley Gurney who enlisted in the 2nd AIF at Claremont, WA, on 6 December 1940. After training he embarked at Fremantle for the Middle East on 5 July 1941, joining D Company, 2/48 Battalion (2/48Bn) at Tobruk, Libya on 12 September. In October, the battalion moved to Palestine and in early 1942 to Syria. In June, as part of 9 Division (9Div) under Lieutenant General Leslie Morshead, 2/48Bn was quickly moved to Egypt to meet Field Marshal Erwin Rommel's advance across Egypt. On 29 June, following a series of losses, the allied Eighth Army, of which 9 Div was a part, fell back to the Alamein Line, barely 100 kilometres from the British Naval Base at Alexandria.

At this point Gurney, closely followed by Private Ivan Hanel, rushed the nearest enemy machine gun post, somehow evading the heavy fire. Nearing the post Gurney threw a grenade and bayoneted a German before he and Hanel jumped into the trench, taking the post. Gurney then turned his attention to the next post but Hanel was killed before he could follow. Gurney continued on alone to take the next machine gun pit, accounting for a further three enemy soldiers in the process. Without slacking he moved toward a third before he was momentarily stunned when a grenade knocked him to the ground. Recovering his senses, he launched forward and disappeared into the enemy trench. He was using his bayonet to effect when he was killed by enemy machine gun fire. His body was later recovered from the enemy trench. For his actions Gurney was posthumously awarded the Victoria Cross. He was later is buried in plot XVI. H. 21. of El Alamein War Cemetery.