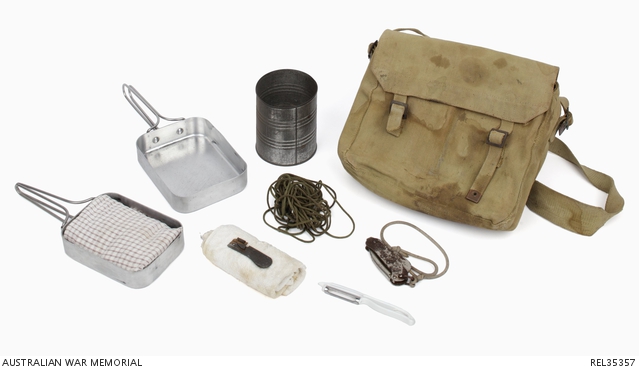 1937 Pattern web equipment haversack with shoulder strap attached and straps for attaching to webbing. On the back of the pack is written '214183 A W WHITE' in black permanent marker. The top flap of the pack is secured by two straps, one of which is broken, the other of which is worn, but complete with it's brass end. The straps attach to brass buckles which are secured by canvas loops to the front of the pack. On the underside of the pack's flap is a former owner's name and number '1/4886 MORGAN D' written in permanent black marker. Inside the pack is a canvas division with a central partition which forms two compartments. These compartments were originally intended to hold a water bottle and a rectangular mess tin. The contents of the pack are a tea towel which is a faded maroon, yellow and white coloured check pattern, a white plastic handled vegetable peeler, a tin can containing an off white face towel and a length of nylon cord, a clasp knife and lanyard which has no maker's stamp, but does have the 'D [broad arrow] D' stamp on one side of the handle, A FRED (Field Ration Eating Device) with '1965 TAREN/ D [broad arrow] D/ KF/ 7330/ 010/ 0931' stamped on the handle next to the tin opener spike, a large dixie with the Broad arrow stamped between the handles and a small dixie with '7350-66-014-5895 S.M.P./ V [broad arrow] stamp 6/68'.

Anthony Walter White was born 16 April 1938 in Randwick NSW. He enlisted in the Army in 1961, with the service number 214183 and was sent to Officer Cadet School (OCS) Portsea where he graduated with the rank of lieutenant. His first tour in Vietnam began on 11 November 1965 with 1 Battalion, Royal Australian Regiment (1RAR). During this time he served in 1 RAR's extensive operations in the Ho Bo Woods area. He transferred to Headquarters, 1 Australian Task Force on 5 June 1966 when 1 RAR rotated home to Australia. White went on to complete his tour with Headquarters, Australian Force Vietnam (Army Component) from 2 August until 16 November 1966. He served a second tour in Vietnam as a captain with 1 Civil Affairs Unit from 18 March 1970 until 28 October 1971.