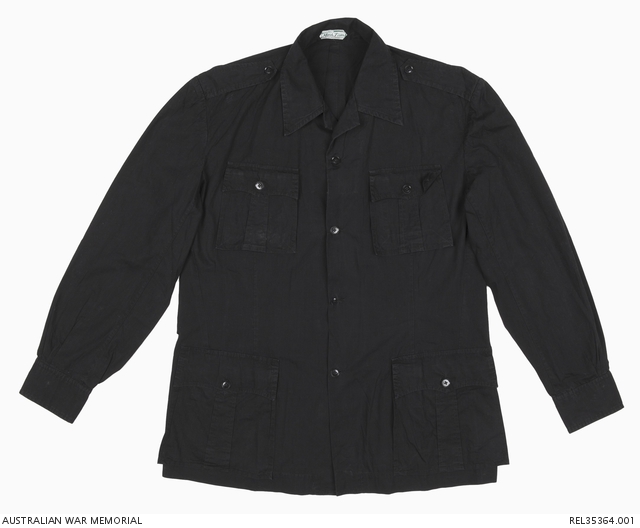 Black cotton shirt. The shirt is collared and has five buttons down the front and four pleated pockets with button down flaps. The rear of the shirt has a single vent lower middle. Running horizontally across the middle of the back is a strip of material for reinforcing. The sleeves are full length with one button cuffs. The maker's label is a white hexagonal shape and the maker's details are sewn on in green cotton. The label reads 'MINH TAM NHA MAY LONG DIEN PHUOC TUY' and is sewn into the neck line of the collar.

Worn by Captain A W White on operations during his second tour in Vietnam. Anthony Walter White was born 16 April 1938 in Randwick NSW. He enlisted in the Army in 1961, with the service number 214183 and was sent to Officer Cadet School (OCS) Portsea where he graduated with the rank of lieutenant. His first tour in Vietnam began on 11 November 1965 with 1 Battalion, Royal Australian Regiment (1RAR). During this time he served in 1 RAR's extensive operations in the Ho Bo Woods area. He transferred to Headquarters, 1 Australian Task Force on 5 June 1966 when 1 RAR rotated home to Australia. White went on to complete his tour with Headquarters, Australian Force Vietnam (Army Component) from 2 August until 16 November 1966. He served a second tour in Vietnam as a captain with 1 Civil Affairs Unit from 18 March 1970 until 28 October 1971.