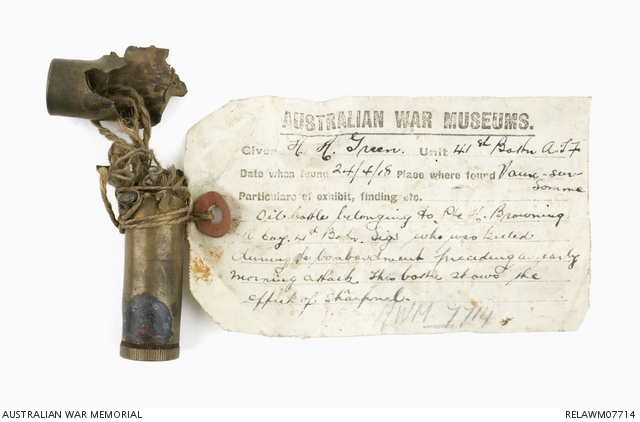 Carried by 137 Private Henry (Harry) Browning of the 41st Battalion when he was killed. Browning was born in London in 1893. He was working as a labourer in Brisbane when he enlisted on 22 December 1915, with his younger brother Allen. Both brothers were posted to A Company of the 41st Battalion. After training in Australia and England, Browning arrived in France with the 41st Battalion in November 1916. After undertaking a signalling course in May 1918, Browning became a signaller, attached to A Company Headquarters. He was wounded in the leg during the battle of Broodseinde on 4 October, 1917, but the wound was not severe and he was back with the unit the following day. On 24 April 1918 Browning was distributing food with his brother near Vaux-Sur-Somme, when he was hit by shrapnel from a shell. He was killed almost instantly.