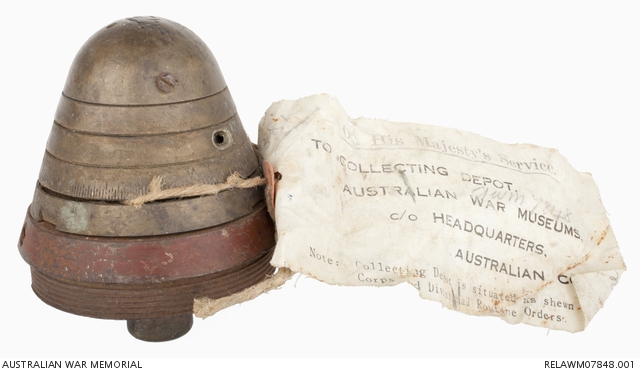 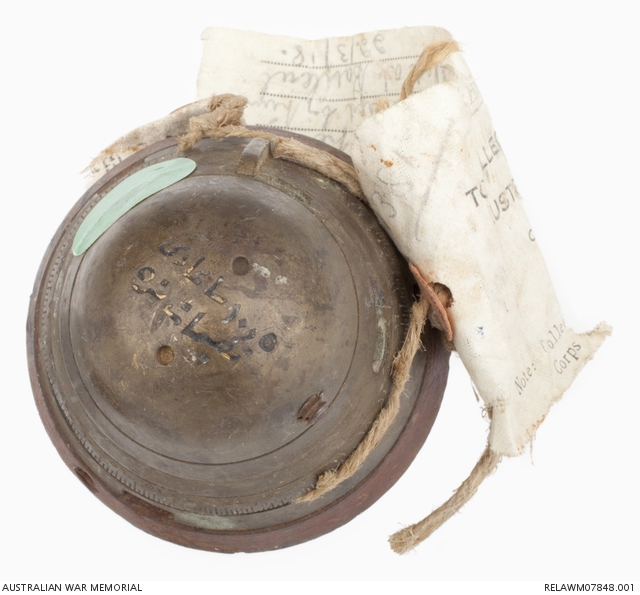 Turkish shell fuze, bearing Turkish markings on the nose. An Australian War Records Section label is still tied around it.

Nineteen year old Alexander (Alex) Thomas Davis Barr enlisted at Melbourne on 28 October 1914 with his parents’ permission. His parents, Charles and Rhoda Barr, ran the general store at Koroit, Victoria. His elder brother, Charles William Barr, enlisted in April the next year. Alex was assigned to C Squadron, 13 Light Horse Regiment, and after training embarked from Melbourne aboard the transport ‘Persic’ on 28 May 1915. He joined his unit at Gallipoli on 3 November; they had been on the peninsula since early September, mainly as part of the Lone Pine Garrison, and remained there until the evacuation.

It was during this two month period that Barr closely missed being struck by this Turkish-made artillery fuze; he kept it as a memento of his close escape. The fuze incorporates an adjustabe mechanism which allowed the shell to be set to explode at a predetermined distance from the gun, allowing air-bursts to be fired.

After the evacuation of the peninsula, 13 Light Horse Regiment was broken up to provide divisional cavalry squadrons for the 2nd, 4th and 5th Divisions; accordingly, Barr was placed with the 5th Division Cavalry and transferred to France in July. After being treated for tonsillitis, he was transferred to 1 Anzac Light Horse Regiment on 1 November 1916 and attached to the 1st Anzac Salvage Section (5 Division) on 10 January 1917. He served with this until his death at Bailleul on 22 March 1918. Charles Barr noted in a letter home that his brother Alex was “in a dugout with four comrades having dinner, when a shell entered and burst, killing them all instantly.” The unit war diary noted that five civilians were also killed. Alexander Barr is buried at the Bailleul Communal Cemetery; his name is one of the twenty seven which are recorded on the Koroit War Memorial, dedicated in 1927.