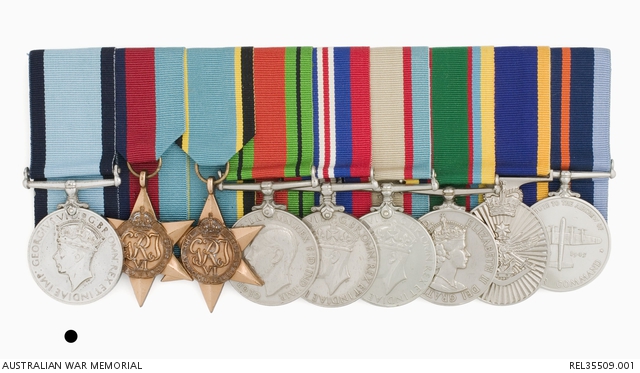 Daniel Rees was born in Maylands, Western Australia on 5 February 1922. He enlisted in the Royal Australian Air Force on 21 July 1941 and was given the service number O51515. He trained under the Empire Air Training Scheme, graduating as a Sergeant Pilot. In June 1942 he was posted to the United Kingdom where he trained on Wellingtons and Lancasters before joining 460 Squadron at Binbrook.

On 12 August 1943 Rees piloted a Lancaster during a raid on Milan, withstanding severe engine failure to complete the mission and return the bomber and his crew to safety. The same month, during a raid on Peenemunde, his bomber was badly damaged by fighter attack. However, Rees was once again able to return to base. For these actions he was awarded the Conspicuous Gallantry Medal (CGM). The citation reads, ‘One night in August 1943, this airman displayed superb skill when piloting an aircraft detailed for an operation against Milan. During the outward flight, 2 of the bomber’s engines became defective but Flight Sergeant Rees continued to his far distant target and bombed it, afterwards flying the disabled aircraft to base. One night in August 1943, Flight Sergeant Rees took part in an attack on Peenemunde. Whilst over the target area, the aircraft was attacked by a fighter. The attacker was driven off but the bomber had been repeatedly hit. The starboard tail plane and the trimming tabs were shot away, 1 engine and the hydraulic system were damaged, while 1 of the petrol tanks was pierced and its contents lost. Despite this, Flight Sergeant Rees coolly and skillfully flew the damaged bomber to base. This airman, who has completed many sorties, has displayed courage and tenacity of a high degree.’
Rees received the CGM from King George V in a ceremony at Buckingham Palace held on 14 March 1944.

RAAF Bulletin No 368, published on 13 March 1944, gave more detailed information about the circumstances of the award:
'A young West Australian pilot who once crossed the Alps to bomb Milan after two of his aircraft's four engines had become defective will attend the next investiture at Buckingham Palace. He is Pilot Officer Daniel Rees, of Fremantle, and he will be invested with the Conspicuous Gallantry Medal (Flying).
Rees was captain of a Lancaster detailed to attack Milan one night in August last year. Soon after the bomber crossed the French coast on the outward journey the starboard outer engine failed.
The crew continued on across France facing the hazardous crossing of the Alps on three engines. Approaching the Alps the starboard inner engine began to shoot out sparks and lose power, and the bomber dropped until it was flying below the level of the mountains. Rees, however, with confidence born of experience, decided to press on to a pass through the heights where the highest peak rises to about 14,000 feet. He accomplished the passage - no easy matter in daylight, but infinitely more difficult at night - Mont Blanc towering above on one side, its snow capped peaks glistening in the moonlight.
The target was successfully bombed, and Rees brought the Lancaster back on the long difficult trek to England, again finding his way through the Alps at a height well below the mountain tops. He finally came into base in the early hours, landed safely, and a tired crew were able to report that the operation had been carried out as ordered.
Another raid mentioned in the citation to Rees' award was the attack on the experimental research establishment at Peenemunde, also in that August. On that operation Rees' Lancaster was attacked by a Ju.88 four minutes after bombing. Just as the mid-upper gunner called to Rees to dive to port Rees saw cannon shells streaming past the starboard side of the fuselage between the starboard inboard motor and the pilot's cabin. The shells carried away the perspex blister, filling the cockpit with smoke and taking the end of the navigator's curtain out through the hole.
As Rees dived to port the rear gunner opened up and he and the mid-upper gunner followed the Ju. with their guns as it broke away, their tracer streaming into the enemy's fuselage and port wing. The fighter peeled off, rolled on its back and was last seen diving vertically.
During the encounter the engineer had been injured by flying perspex, one starboard petrol tank had been severely holed, and about a third of the starboard elevator had been shot away. Within 15 minutes 500 gallons of petrol had drained from the holed tank.
The aircraft became very difficult to handle but the pilot managed to climb to the most economical height for petrol consumption until the coast was reached. Once out to sea the motors were cut until the Lancaster was travelling slowly and gradually losing height.
The wireless operator began sending out position reports as the bomber staggered over the North Sea. The crew could see other returning bombers sweeping past high above.
Finally the English coast was reached, and with only 30 gallons of petrol left Rees brought his aircraft safely to base once more.'

Rees was later promoted to Pilot Officer and then Flight Lieutenant. He spent time during the remainder of the war instructing on Wellingtons and Lancasters, returning to Australia in January 1945. He then served in North-Western Western Australia flying transport aircraft and in 1946 served as Air Transport and Movement Officer in Iwakuni, Japan before his discharge from the RAAF on 31 October 1947. He returned to his pre-war civilian occupation as Clerk of Courts with the Crown Law Department but from August 1952 also enlisted in the Air Training Corps, serving as the Flight Commander of No. 3 Flight Fremantle. He lived much of his post-war life at Mandurah, WA and died on 21 June 2004.