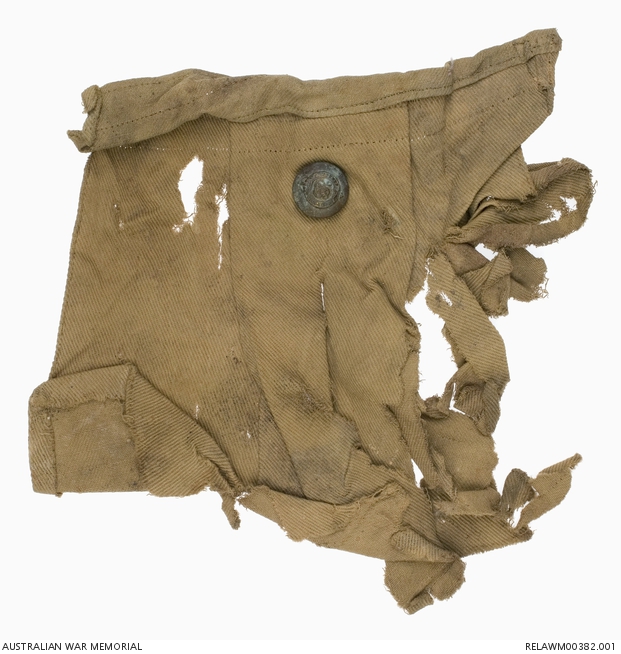 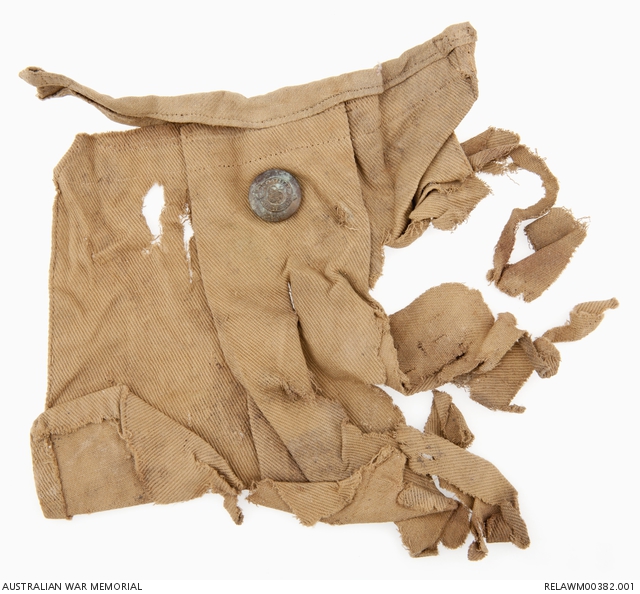 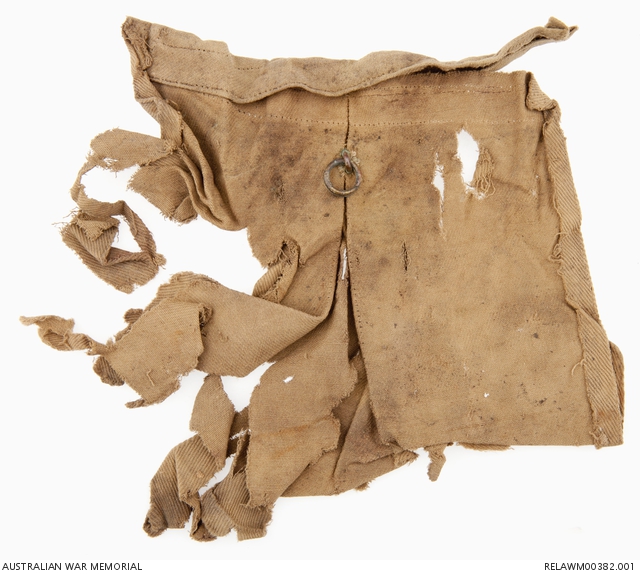 Damaged breast patch pocket of a British cotton khaki drill tunic. There is a pleated section down the centre, with a brass button at the top. The button features a garter, surrounding the cypher of King George V, surmounted by a crown. There are remains of gilding on the button.

Damaged pocket from a British officer's tunic found near The Farm in the Chunuk Bair area by the Australian Historical Mission (AHM) on 3 March 1919. The button on the pocket is the type worn by brigadiers and colonels (not including lieutenant colonels, who wore regimental buttons). The fabric differs from the standard wool gabardine or barathea used by officers in the British Army, which could indicate the uniform was privately tailored.

This piece was found among the remains of men killed on 9 - 10 August 1915. While it is possible that it came from a discarded tunic, it is more likely the pocket was associated with human remains found in the area in 1919. No colonels, and only one brigadier, Brigadier General Anthony Hugh Baldwin, were killed in the area. Another brigadier, Brigadier General Richard Joshan Cooper, was wounded at The Farm, but was evacuated from the front.

Baldwin commanded the British 38th Brigade. He was killed at his headquarters near the crest of The Farm, when the Turks counter-attacked on 10 August 1915. His body, like those of his men, was not recovered at the time. It was not until the Graves Registration Unit collected the remains after the war that they were buried, most at The Farm Cemetery nearby. None of the remains in this cemetery are individually identified, and there are only seven memorial headstones to men believed to be buried within it. It is possible that Baldwin's remains were interred there.

Cooper, who was the commander of the 29th Brigade, and who succeeded Baldwin at The Farm after his death, was wounded in the lungs and evacuated soon after, so there is the possibility this pocket was from his tunic. However, given that Baldwin's remains were left near The Farm for years, it is more likely that the pocket came from his uniform.

The AHM visited the area in March 1919. There they found the remains of Baldwin's men, as well as those of other units which fought around Chunuk Bair. Australian Official Historian, C E W Bean wrote 'I have nowhere, except at the Nek, seen the dead lying so thick, I think, as on these slopes [around Chunuk Bair] and those of The Farm.' .