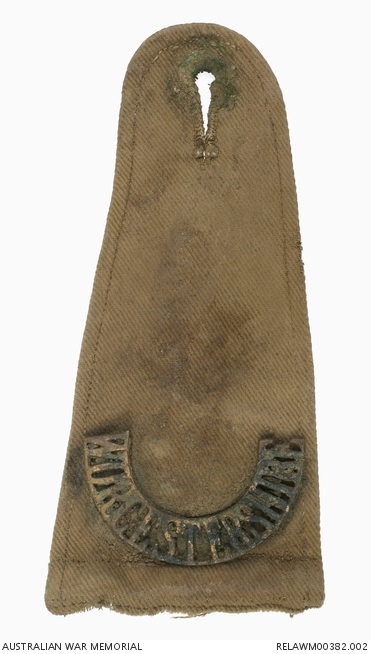 Khaki cotton drill shoulder strap cut from a British tunic. The strap has a button hole at one end marked with verdigris, where a button once sat. At the bottom of the strap is a curved brass shoulder title, 'WORCESTERSHIRE', with 2 lugs inserted through the strap held in place by a metal plate and a split pin. There is dried mud around the front and back of the shoulder title, and a patch of dried mud near the centre of the strap. The shoulder title has verdigris and the remains of gilding.

On 7-8 August an attempt was made by British, Indian, Australian and New Zealand troops to capture Hill Q, Hill 971(Koja Chemen Tepe) and Chunuk Bair. The attempt was ultimately unsuccessful, however the 1/6th Gurkha Rifles, with units from the 9th Worcestershire Regiment (Regt) and 7th North Staffordshire Regt, had managed to advance past The Farm, to a position only 228 metres below the northern end of Chunuk Bair.

Major General Alexander Godley made plans for a further attack on 9 August to capture the crest of the main ridge between Chunuk Bair and Hill Q. On the left, the 39th and Indian Brigades (Bde), under Major General H Vaughn Cox, were to capture Hill Q. On the right, the New Zealanders, under Brigadier General Francis Johnston were to assault the southern shoulder of Chunuk Bair and extend their line towards Battleship Hill. The centre of the attack, upon the summit and northern shoulder of Chunuk Bair, was to be made by the 38th Bde, under Brigadier General Anthony Hugh Baldwin.

Cox arranged for men from 1/6th Gurkha Rifles and a detachment of 6th South Lancashire Regt (who had replaced the 7th Gloucestershire Regt in the 39th Bde), under Major Cecil Allanson, to advance on Hill Q from their position near the crest between Chunuk Bair and Hill Q; and for the 2/10th Gurkha Rifles and the 9th Worcestershire Regt to move from their position, immediately north of The Farm, to a point half way between Hill Q and Chunuk Bair.

Early on 10 August the Turks began bombing Chunuk Bair and the Farm. A little later they bombed the 9th Worcestershire position, forcing them to fall back around 4.15 am. Later that morning the Turks counter attacked, forcing the 38th Bde back from The Farm and capturing the Pinnacle, before machine gun fire from the Apex halted their advance.

The British suffered heavy casualties. Those that were killed during the four days were left unburied. In 1919 the unburied remains of those who died in August 1915 were found where they had fallen, scattered in their hundreds around the ridges, by the Australian Historical Mission to Gallipoli. Fragments of uniforms and possessions were also found. This shoulder strap was collected on 3 March 1919, near the crest of the range north of Chunuk Bair.