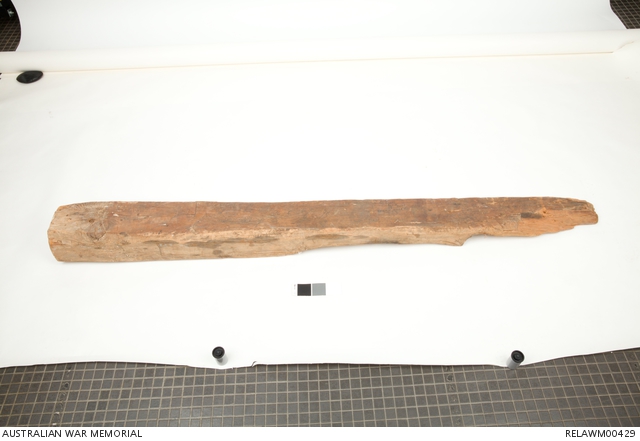 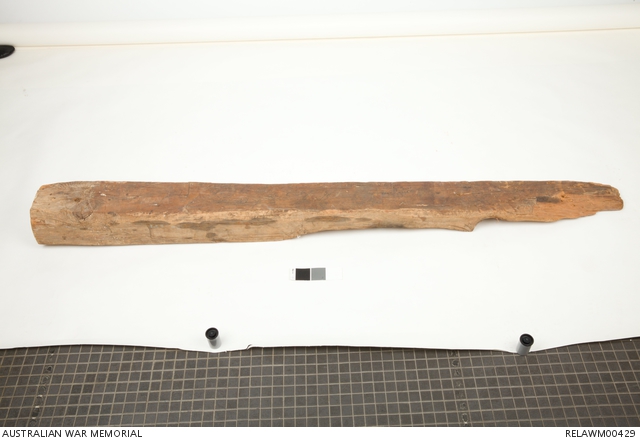 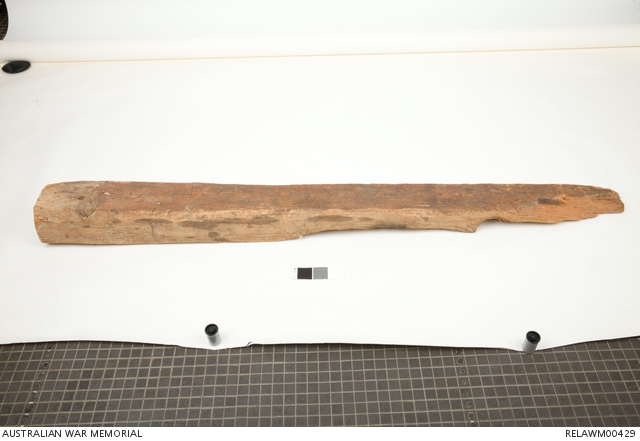 Wooden beam, that has been crudely squared along its length. One side of the beam has been torn away, leaving it rough and splintered. This has caused the beam to taper down to point at one end. At this end of the beam, the pointed end of a bent and rusty nail protrudes from the wood. There are two other nails at the other, thicker end of the beam, but they do not protrude through the wood.

This beam bears the signatures of approximately 20 Australian servicemen. The legible signatures are of men from 24 Battalion (Bn), but there may also be signatures from men of the 23rd Bn. 24 Bn landed at Gallipoli on the night of 4/5 September 1915 and first went to Rest Gully, with some of the unit later going to Shrapnel Gully. On 6 September they took over positions at Quinn's, Courtney's and Steele's Posts and then on 10 September positions at Lone Pine. The battalion spent the next 16 weeks sharing duty in the Lone Pine trenches with 23 Bn. The fighting at Lone Pine was so dangerous and exhausting, that battalions rotated every 24-48 hours.

Three men have been positively identified from their inscriptions on this beam. They are Bob Jack, G Bibby and A W Millett.

319 Private Robert Duncan 'Bob' Jack was born at Caulfield, Vic. He was serving with the Richmond Rifle Club when he enlisted in the AIF on 7 April 1915. Jack embarked from Melbourne with A Company, 24 Bn aboard HMAT Euripides on 10 May 1915. He landed at Gallipoli on the night of 4/5 September 1915 and served on the peninsula until the unit was evacuated on 19 and 20 December 1915.

After time in Egypt, Jack embarked in March 1916 for France. He volunteered for a raid that took place on the night of 29/30 June in a raiding party that comprised 200 troops from four battalions, including 24 Bn. No Man's Land was about 300 yards wide. On the night of the raid the men crawled out to within 50 yards of the German parapet. At 11.58 pm an artillery barrage opened up on the Germans, lasting 3 minutes. When it ended the raiders stormed the German trenches.

24 Bn's role was to capture five German prisoners required for intelligence purposes. In addition, many Germans were killed and material and documents were secured. Jack was one of five men from 24 Bn killed during the raid. The bodies of four of the men killed in the raid, including Jack, were brought back to the Australian lines. He was buried on 30 June at Ration Farm Cemetery 1 1/2 miles south of Armentieres. In 1923 his body was exhumed and his remains, together with others buried in this cemetery, were moved to Plot VI, Ration Farm New Military Cemetery (now called Ration Farm Military Cemetery, La Chapelle-D'Armentieres).

1027 Private George William Bibby initially enlisted in October 1914, in the 14th Battalion, with the service number 825, but was discharged in December as medically unfit. He successfully re-enlisted on 6 March 1915. Bibby embarked from Melbourne with A Company, 24 Bn aboard HMAT Euripides on 10 May 1915. He embarked from Egypt for Gallipoli, landing on the night of 4/5 September 1915 and served there until the battalion was evacuated on 19 and 20 December 1915.

After time in Egypt, Bibby embarked in May 1916 for France, serving the remainder of the war on the Western Front. He returned to Australia on 30 April 1919 aboard the Kashmir and was discharged on 12 September 1919.

1592 Private Alfred William Millett enlisted on 25 March 1915. He embarked with the 1st reinforcements of 24 Bn from Melbourne aboard HMAT Ceramic on 25 June 1915. After a period of training in Egypt, Millet embarked with 24 Bn for Gallipoli, landing on the night of 4/5 September 1915. He served on Gallipoli until the unit was evacuated on 19 and 20 December 1915.

After a further period in Egypt, Millett embarked for France with 23 Bn. In May 1917 Millett was transferred to the 6th Machine Gun Company. He survived the war and returned to Australia aboard the Tras Mont, disembarking on 22 May 1919. He was discharged on 14 September 1919.

This wooden beam was found in a hut near Maidos, at Gallipoli in 1919 by the Australian Historical Mission. They were surprised to find the beam with inscriptions by Australian soldiers near Maidos, as no Australians were known to have reached that far inland. The Mission later discovered that the logs used to build the hut had been taken from the Lone Pine trenches after 1915.