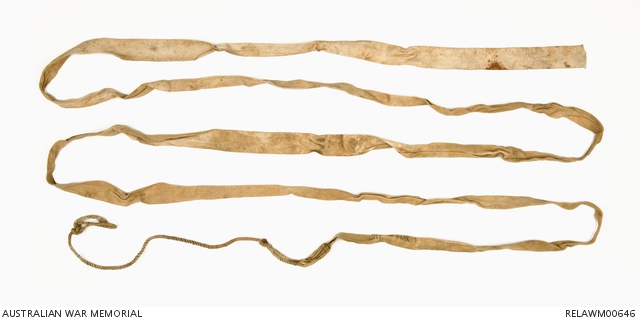 Length of white herringbone weave, infantry pattern, jumping-off (or forming-up) tape. One end is turned over and stitched in place, to hold a short length of fine hemp cord, which has a loop at each end. The loop on the free end has a whipped end to prevent fraying,and can be adjusted around a securing peg (not present) by means of a slip knot. The tape is stamped in black 'Waring & Gillow Ltd. 50 YDS. 1917'.

This tape was laid to mark the forming-up line of the battalions of the 3rd Brigade (1st Division) prior to the advance, in the battle of Menin Road on 20 September 1917. The brigade comprised the 9th, 10th, 11th and 12th battalions. These tapes were normally laid the night before an attack. They indicated a start point for the assembly of troops, and were also laid away from this point to indicate the line of attack that should be followed. Supporting artillery were given map coordinates for the starting off tape, so that the barrages that usually preceded an infantry attack could be laid accurately without risk of injuring their own troops.

The 3rd Brigade's participation in the battle of the Menin Road, part of the larger Third Battle of Ypres, encompassed fighting at Glencorse Wood, Polygon Wood and Nonne Boschen on 20 and 21 September. The battle was deemed a success and the Brigade suffered a 'light' casualty rate of about 17% of its 4,000 man strength. 506 Private Roy Inwood, from the 10th Battalion, was awarded a Victoria Cross during this action.

The Brigade's War Diary for 19 September noted at 11pm, 'tapes laid out for forming up' . At 3 am on 20 September the men of the brigade began, in 'sleeting rain' to assemble at the tapes. The diary then notes, '4.30 am all units in position'. The War Diary for the 11th Battalion recorded 'the day of days - our boys got out to the forming up position like the disciplined soldiers they are - without a hitch.' After enduring a German artillery barrage at 4.50 am, the men of the 3rd Brigade moved off from the starting tapes at 5.20 am. 'Everything' recorded the Brigade Diary, had 'occurred as planned'.