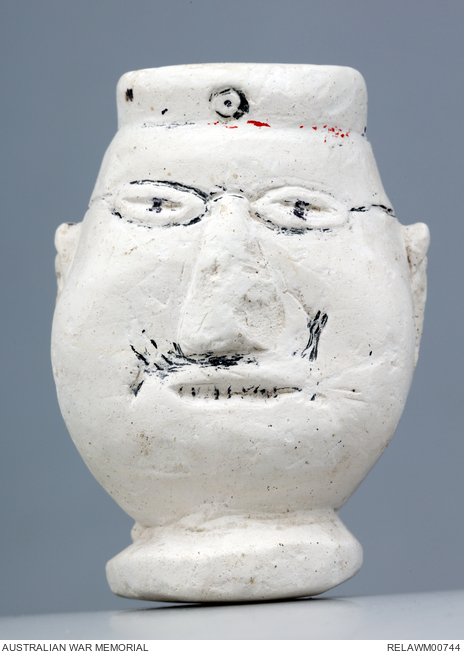 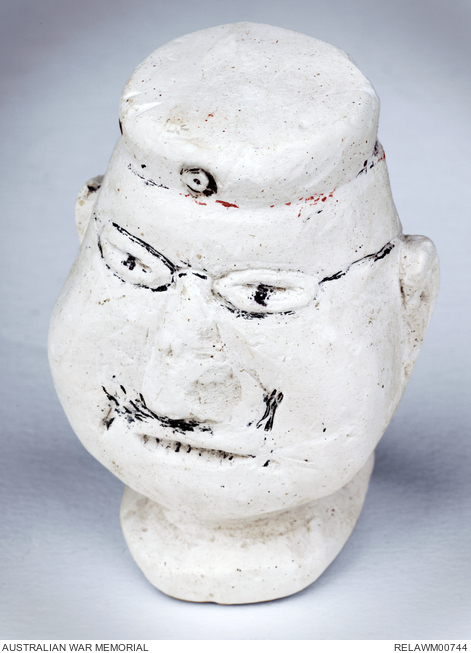 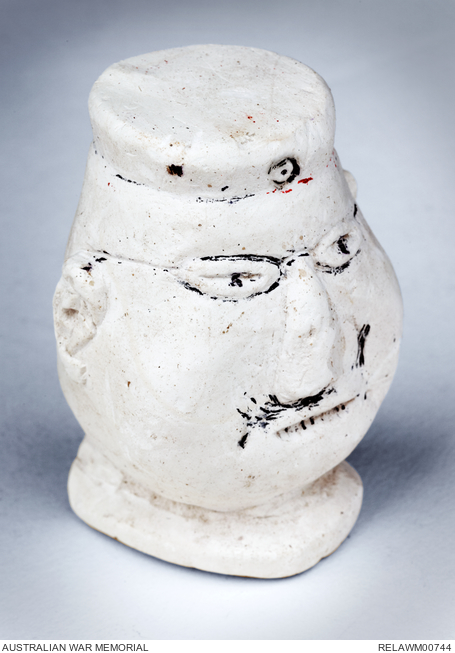 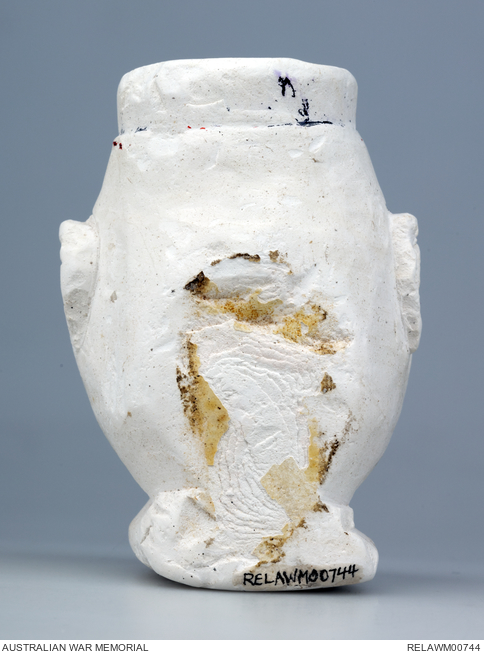 Head of a German soldier carved from chalk. The soldier wears a pair of glasses and has a moustache. The glasses and eyes, mouth, moustache and field cap have all been highlighted with black ink and there is a residue of red ink around the bottom edge of the soldier's cap. On the bottom of the figure some faded writing appears to read '...ELL / BY Q / 13th Battn / THGGER / 1...2'. There is a patch of yellow discolouration on the back of the figure.

Head of a German soldier, carved by a member of 13th Battalion, AIF from chalk dug out of the ground when constructing trenches on the Somme. 13th Battalion AIF was raised from late September 1914, six weeks after the outbreak of the First World War. The battalion was recruited in New South Wales, and with the 14th, 15th and 16th Battalions formed the 4th Brigade, commanded by Colonel John Monash. The Brigade embarked for overseas in late December arriving in early February 1915.

The 4th Brigade landed at Anzac Cove late in the afternoon of 25 April 1915. From May to August the battalion was heavily involved in establishing and defending the Anzac front line. In August, the Brigade attacked Hill 971. The hill was taken at great cost, although Turkish reinforcements forced the Australians to withdraw. The 13th also suffered casualties during the attack on Hill 60 on 27 August. The battalion served at Anzac until the evacuation in December.

After the withdrawal from Gallipoli, the battalion returned to Egypt. While in Egypt the AIF was expanded and was reorganised. The 13th Battalion was split and provided experienced soldiers for the 45th Battalion. The 4th Brigade was combined with the 12th and 13th Brigades to form the 4th Australian Division.

In June 1916 the 13th sailed for France and the Western Front. From then until 1918 the battalion took part in trench warfare. Its first major action in France was at Pozières in August. The battalion, with most of the 4th Brigade, suffered heavy losses at Bullecourt in April 1917 when the brigade attacked strong German positions without the promised tank support. The battalion spent much of the remainder of 1917 in Belgium advancing to the Hindenburg Line.

In March and April 1918 it helped to stop the German spring offensive. It subsequently played a role in the great allied offensive of 1918, fighting near Amiens on 8 August 1918. This advance by British and empire troops was the greatest success in a single day on the Western Front, one that German General Erich Ludendorff described as '..the black day of the German Army in this war..'. The 4th Brigade continued operations until late September 1918.