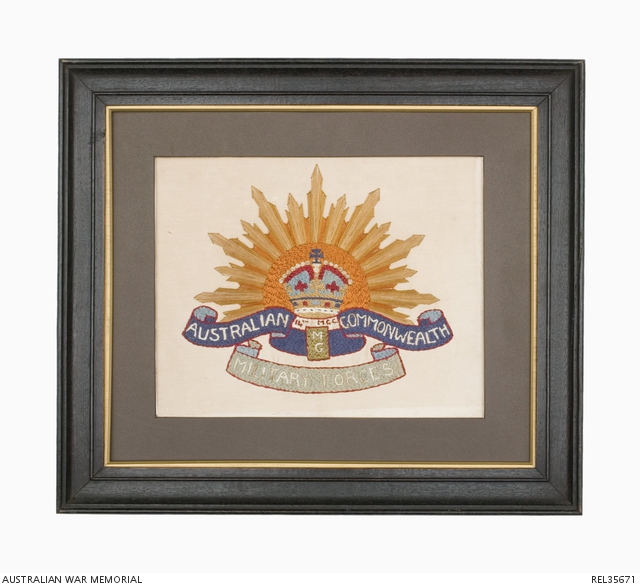 Framed rehabilitation embroidery completed by 2719 Private Stanley African Chivas, born on 3 November 1896 in Aberdeen, Scotland. As an 18 year old Chivas, who had recently emigrated to Australia, enlisted with the Australian Naval and Military Expeditionary Force in December 1914 but was discharged at his father's request on 11 May 1915 as he was underage.

Chivas then enlisted in the Australian Imperial Force on 3 July 1915 and sailed from Sydney aboard HMAT Runic on 9 August. He joined 2 Battalion on the Gallipoli Peninsula on 31 October. Six days later Chivas received a bullet wound to his left thigh and was evacuated by hospital ship to Egypt for treatment. After his recovery he transferred to 54 Battalion in February 1916, and then to 14 Machine Gun Company in March. He proceeded to France in July.

Chivas was again wounded in action on 10 August 1918. Shortly after his recovery Chivas was wounded for the third time on 1 September, receiving severe gun shot wounds to his right arm, leg and buttock. He was invalided to the United Kingdom for treatment and during his rehabilitation made this embroidery as part of his occupational therapy programme. Chivas personalised the Rising Sun badge design by incorporating the name of his unit into the embroidery. Chivas married Alice Edward Collie in Scotland in January 1919 before returning to Australia aboard SS Orontes in May. He was discharged on 30 August.