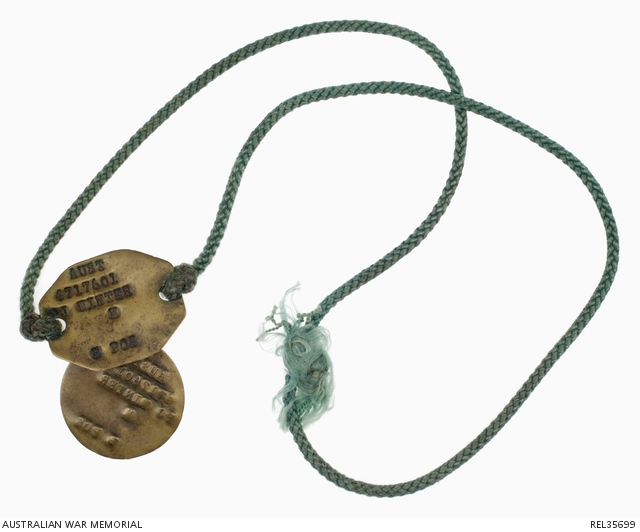 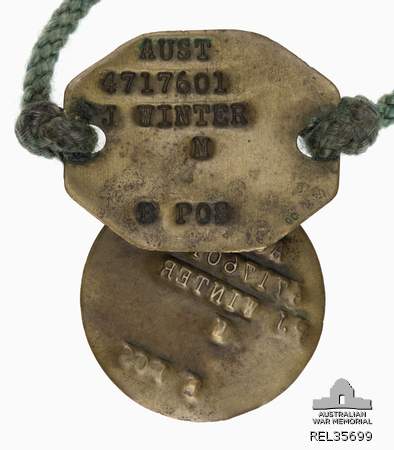 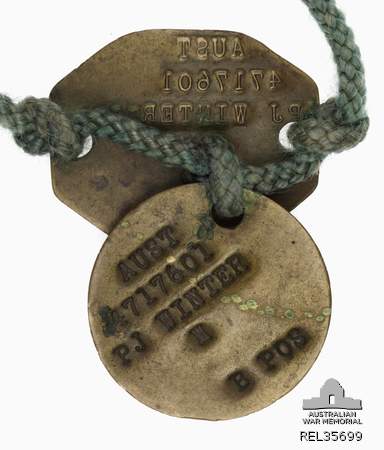 Pair of brass identity discs, one round (lower) and one octagonal (upper) attached to an olive green nylon cord. Each disc is impressed with blackened letters 'AUST 4717601 PJ WINTER M B POS'.

Worn by 4717601 Peter James Winter during his service in Vietnam with 7 Battalion Royal Australian Regiment (7RAR) from February 1970 to March 1971.

Winter was born in Adelaide on 6 February 1945 and was called up in the first National Serviceman's ballot in 1965, requiring him to serve for two years. He was selected for officer training at Scheyville near Windsor NSW and graduated a 2nd Lieutenant in December 1965. Winter was discharged in June 1967. He joined the regular army in September 1968 and volunteered to train in preparation for service in Vietnam.

Winter left for Vietnam on 17 February 1970 with 7 RAR. The battalion was mainly involved with pacification operations in Phuoc Tuy Province, which had become the 1 Australian Task Force priority in April 1969. This involved seeking out and destroying the enemy in its base areas, preventing enemy access to the civilian population, and helping to create a secure climate for South Vietnamese social, political, and military life. The work was demanding, dangerous, and monotonous for the troops.

As part of the pacification programme, 1ATF took part in Operation Cung Chung between 12 June 1970 and February 1971, which involved intensive patrolling and ambush in order to deter the enemy from moving through the area. The operation was successful but the intensive patrolling placed a strain on the troops.

In February 7RAR was relieved by 3RAR and left for Australia later that month, arriving in Sydney on 10 March.
Winter remained in the army. He was promoted to Captain in May 1971. Between 1972 and 1980 he completed a least ten schools or courses including basic parachuting and shallow water diving. Winter was promoted to Major in December 1980, and then served overseas as an instructor to the Papua New Guinea Defence Force in 1981.

Winter retired in 1986 and in 2003 was living in the Adelaide Hills, where he was employed at Woodside Primary School using his experience of army life to liaise with, and support, Defence Force families in the school's community.