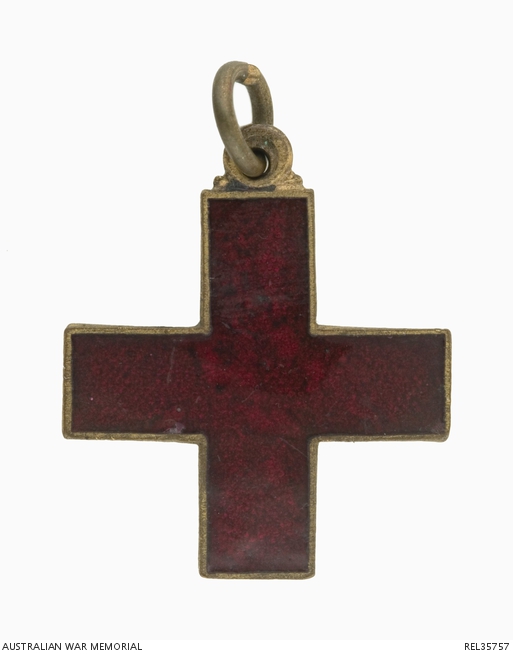 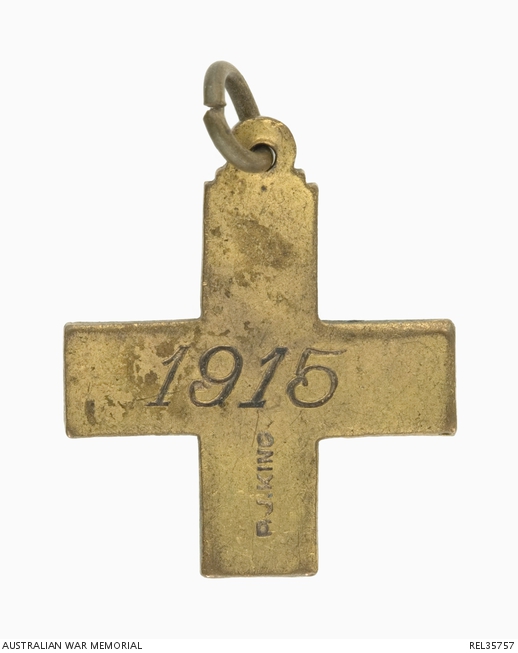 Brass and red enamel pendant in the shape of a Greek cross. The cross is engraved '1915' on the reverse and is stamped with the manufacturer's name.

Pendant associated with the service of Staff Nurse Anne Laycock Hunter, born in Sydney in 1880 to William Walton and Anne Hunter. She trained at the Coast Hospital, Little Bay, Sydney (now Prince Henry Hospital) for three years. Hunter enlisted in the Australian Army Nursing Service in January 1915, joining the reinforcements for 1 and 2 General Hospitals in March. She embarked from Sydney on 13 April 1915 aboard HMAT Kyarra and served in Egypt until March 1916 when she was sent to the Western Front where she served in hospitals at Rouen. Hunter was invalided to Australia in October 1916 on the Hospital Ship Karoola. After a few months back in Australia she left to return to England on 24 January 1917. In 1917 and 1918 Hunter served in the following hospitals: 3 Australian Auxiliary Hospital at Dartford, which treated patients with psycho neuroses and mental disorders, such as shell shock; 2 Australian Auxiliary Hospital at Southall, which treated amputees; and 1 Australian Auxiliary Hospital, which became an ear, nose and throat centre and included specialist cases, such as blinded men, and men needing physiotherapy or specialist surgery. On 2 June 1919 Hunter embarked for return to Australia. Anne Laycock James (nee Hunter) died in 1962. These crosses were sent in Christmas comforts parcels to Australian nurses serving in Egypt in 1915.